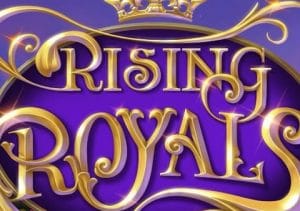 Head to the Palace of Versailles

The design in the Rising Royals slot game is rich and opulent. With the Palace of Versailles in the background, the reels are flanked by ornate chandeliers. There you’ll find A to J playing card values as well as 3 rather foppish looking members of the royal court. The best symbol is the Rising Royals logo which awards 2, 4 or 15 times your total stake if you land 3, 4 or 5 on a payline.

You won’t find masses of extras in Rising Royals. In fact, the only extra is the Symbol Lock Re-Spin feature. This is triggered every time you land a winning combination made up of a higher value symbol (i.e. not an A, K, Q or J symbol). The successful symbols are held and the rest of the reels spin again. If a new matching symbol lands, it’s also held and another re-spin follows.

Each re-spin that includes a locked matching symbol fills a step on the Upgrade Meter to the side of the reels. When the meter is full, the locked symbols all morph into the next most valuable symbol with the Symbol Upgrade feature. The meter then resets. The re-spins continue until you don’t land a new matching symbol or you’ve filled the whole of the reels. A final payout is then made.

The theme and design in Rising Royals might be rather extravagant. That’s not really the case with the gameplay though which is rather straightforward. We like the streak re-spin feature and you can expect to land it regularly in Rising Royals. The variance is in the medium range with only top wins of 313.8 times your stake per re-spin.

It’s not often that slot developers take us back to historical France. Rising Royals is nicely done. The gameplay doesn’t offer too much in the way of thrills but it’s a solid if simple performer. I do prefer more potentially paying slot games – Microgaming has many options such as Game of Thrones and Immortal Romance.