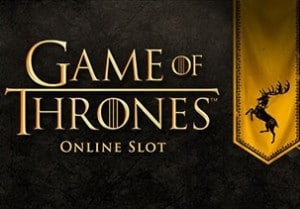 Microgaming has teamed up with HBO for the official Game of Thrones slot game which was released in January 2015. The review below focuses on the 243 ways to win version which is better. Visually, Game of Thrones is quite simple with the Iron Throne forming the backdrop.

With the official soundtrack playing as you spin the reels, symbols include A, K, Q and J royals as well as the banners from each of the houses of Westeros – you have Targaryen, Stark, Lannister and Baratheon symbols with the latter paying 1, 2.66 or 8.33 times your stake for 3, 4 or 5 in combination.

The Game of Thrones logo symbol is the wild and replaces all symbols bar the Iron Throne scatter – 3, 4 or 5 in combination will give you 1.66, 3.33 or 16.66 times your stake. Being a 243 ways to win title, you can get winning combinations by seeing 3 or more matching symbols on adjacent reels (beginning from the first reel).

The famous Iron Throne serves as the scatter symbol. Find 2 to trigger a random cash prize in the Scatter Bonus feature. Find more than that and it will activate the Free Spins feature. You'll then be given the choice of 4 features, each based on 1 of the famous Houses of Westeros and each offering something a little different:

The goodies can keep on coming as extra free spins are on offer if 3 Iron Throne scatters appear during any of the 4 free spins features. That means you can benefit from up to 36 free spins in total from the Targaryen Free Spins feature for example.

I would recommend you play the Game of Thrones 243 ways to win version – the biggest wins come in the Baratheon Free Spins feature where the 5x multiplier can lead to payouts of up to 20,250 times your stake on every single free spin!

The slot version may not lack the X-rated sex and violence of the television series but there's still plenty to enjoy though, especially thanks to the free spins features. And with a maximum payout of 20,250 times your stake, there's more than enough treasure on offer to keep the Iron Bank happy! If you like slots based on television series, NetEnt’s Vikings is recommended.