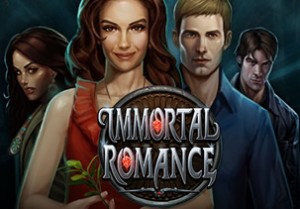 Released in 2011, Immortal Romance has become something of a cult classic among online slot fans. Telling a tale of dark love and intrigue, you’ll see A, K, Q, J, 10 and 9 royals on the reels – there’s also books, castles and characters Amber, Troy, Michael and Sarah.

There’s an Immortal Romance logo symbol which is the wild and rewards you to the tune of 50 times your stake if you manage 5 on a payline – it also replaces all symbols and doubles your win with other symbols.

On to the features. There is a randomly triggered Wild Desire feature in the base game – this can be highly lucrative as it turns up to 5 reels into wild reels. Doing this will result in a payout of 1,500 times your stake.

The Chamber of Spins

Look out for the Door Knocker as this is the scatter. Find 5 of these on a payline and a bumper coin payout awaits (200 times your stake). More importantly, 3 or more will activate The Chamber of Spins – here, you are offered a selection of free spins combined with wilds, multipliers and rolling reels. Once activated, there are 4 features based on the slot's 4 central characters, Amber, Troy, Michael and Sarah.

On the variance scale, the Immortal Romance slot is on the high side of medium. The features are very impressive and they're matched by the visuals and soundtrack. It may be relatively old but just like its vampire stars, it has aged very well. If you like the Twilight series or Buffy the Vampire Slayer, Immortal Romance will be right up your street.

Even if you're not a horror buff there's plenty to enjoy. The potential 6x multiplier from the Vampire Bats feature (in the Troy feature) can result in top payouts of 12,150 times your stake on every free spin! If you want a slot that offers similar features, Microgaming’s Thunderstruck II was the game Immortal Romance was based on (and has been improved). In conclusion, Immortal Romance is one of THE best slots around so well worth playing.