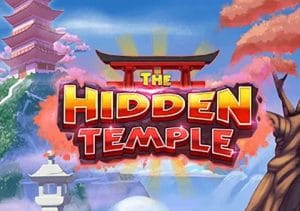 The action here takes place using a pachinko style machine found in Japanese gaming arcades. You’ll see a set of reels at the bottom and a series of cartoon animations above them. Different scenes indicate whether the machine is in a ‘hot’ or ‘cold’ state and whether a potential winner is in the pipeline.

You’ll see cherries, bells and melons spinning around the reels as well as The Hidden Temple logo which is the best paying standard symbol. Land 3 of these on a payline and you’ll pocket an award of 12 times your stake.

Look out too for the Replay symbol which can award a re-spin. There are also blue and red lucky 7 symbols. These both award 15 times your stake if you land 3 in a line as well as triggering the Big Bonus Mode feature. Here you can land 7 free spins with a win guaranteed to land on each of them. You could also see the RTP rate stand higher than in standard mode play if you have active Power Ups. You’ll get 3 power ups with the blue 7s and 2 power ups with the red 7s.

This is comfortably the most confusing slot game we’ve ever played. We had no idea what was happening pretty much the whole time we were playing The Hidden Temple. The tiny symbols on the reels are hard to decipher and the animations are totally confusing.

Imagine being dropped into a city in Japan and not being able to speak a word of the language or even have Google translate to help you out. That’s what it felt like playing The Hidden Temple. It might make perfect sense to a Japanese Pachinko player, but it left us totally confused. Medium variance, you can win up to 750 times your stake on each spin.

If you fancy a challenge, then deciphering what’s on offer in The Hidden Temple should keep you busy – I would much rather play other Push Gaming slot games with Razor Shark and The Shadow Order my 2 favourites.