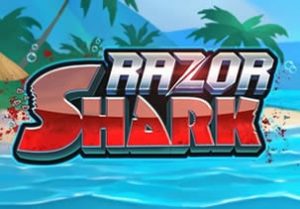 The cartoon-style design in Razor Shark is excellent. With the creatures and plants of the ocean in the background, you’ll see oxygen tanks, goggles, flippers and a radio spinning around the reels. They are joined by 4 higher paying fish symbols. The best of these pays 25 times your stake if you land 5 across a payline. Finally there’s the shark which is the wild. This can land on all 5 reels and pays 2.5, 12.5 or 50 times your stake if you land 3, 4 or 5 in combination.

If the Mystery Stacks are filled with standard symbols, a new payout calculation is made. If it’s the Golden Sharks, you’ll activate the Razor Reveal feature. Each shark in the Mystery Stacks will spin again. They will then reveal a coin which comes with a cash value of between 1 and 100 times your stake attached or scatters which could help trigger the Free Games feature.

To trigger that Free Games feature, you’ll need to land 3 or more scatters on the same spin. During this round, Mystery Stacks fill reels 2 and 4. Each time the Nudge & Reveal feature activates, a multiplier, which starts at 1x, increases by 1. The free spins continue until there are no more Mystery Stacks in view anywhere.

The design here has a gentle feel. Don’t be fooled though. This is a super volatile slot game. Fill the whole of the reels with wild sharks and a payout of 1,000 times your stake is on offer. Bring the multipliers into play and you could boost that by up to 50x on each free spin in the Free Games feature. This can lead to 50,000 times stake wins!

It’s certainly unusual but Razor Shark is a very playable slot game, especially if you like high variance action. For more big potential wins, The Shadow Order (by Push Gaming) and Dead or Alive II (by Net Entertainment) would be my choices.