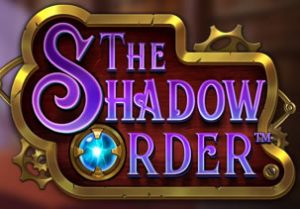 Like the other slot games in the Push Gaming catalogue, the design in The Shadow Order is first class. It has the feel of a mash up between James Bond and The Da Vinci Code. The setting is the garden of a magnificent mansion. Symbols on the reels include coins, chess pieces, code breakers and books of cyphers.

The pair of gold rings symbol is the best of the standard symbols. Land a cluster of 3, 4 or 5 in combination for a payout of 2.5, 25 or 120 times your stake. The order medal is the wild and gives you wins of up to 300 times your stake for 5 in combination. The cascading reels mean that successful symbols are removed and new ones drop in and replace them. The cascades continue as long as a new winner is created. So far, so standard.

Get on a roll with the cascade wins and you’ll bring the green, blue and purple orbs sat above the reels into play. These orbs are wild. You’ll notice that 3 squares on the game grid are highlighted. These are the Hot Zones. Hope to see an Orb fall into a Hot Zone as it activates a feature:

At the end of a spin, you could randomly trigger 1 of the Character features. You’ll start with Molly the Messenger. Collect rings to unlock the other 3 characters – Billy the Gambler, Archie the Spy and Amarillo the Magister. Each character comes with a special extra:

If all 3 orbs reach the bottom right-hand corner of the reel grid, you’ll activate the Free Games feature. These orbs are turn into sticky wilds for 5 free spins and can also trigger expanding multipliers and add extra free spins to your total. The multipliers can reach up to 30x!

There’s plenty going on in The Shadow Order and the gameplay can feel rather complicated. We’d recommend having a few spins in free play mode until you get used to the unusual features and how they are triggered. You won’t find many better-looking slot games than The Shadow Order. The soundtrack could come straight out of a mystery movie too. The design here really is top notch.

The gameplay is solid enough too with the cascading reels offering a steady stream of action. The feature rounds aren’t bad either. We found them quite hard to come by though. Unlocking new characters certainly keeps thing fresh though. As far as variance goes, we’re in the medium range – the top payouts come from the 30x multipliers in the Free Games feature as it can result in a 24,204.8 times stake payout on every free spin.

The unusual gameplay and features won’t be for everyone. If you like the spying and espionage theme, then then you’ll want to gain entry into The Shadow Order. I also recommend you try Razor Shark (by Push Gaming) which looks great and has big win potential.