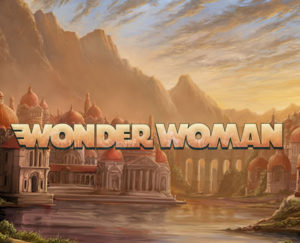 As you’d expect given the theme, the design here is done comic book style. With a jungle city in the background, you’ll see lower value royal values plus a cast of characters from the comic book spinning around the reels. The best of these is Cheetah which pays 75 times your stake if you land 5 on a payline.

Better still is the W logo which is the wild. This pays 125 times your stake for a 5-symbol combination. On any spin, you could see stacks of matching symbols appear on 1 or multiple reels. This is known as the Stacked Symbols feature. Like many of Playtech’s DC collaborations, there’s a good range of extras on offer in Wonder Woman.

Fire Wilds feature - whenever a Fire Wild hits, all instances of 1 of the higher paying character symbols transform into a wild. A new payout calculation then follows.

The Cheetah feature - land a Barbara symbol on reels 1 and 5 and all the higher value symbols on the reels transform into the top paying Cheetah.

Wonder Woman comes with 3 free spins features - these are triggered by landing the scatter on reels 1 and 5 on the same spin. Press spin to reveal which 1 of the 3 free spin rounds you’ll receive. You’ll start with 12 free spins in each of them:

Wonder Woman is part of the DC Super Heroes Jackpot network. This can trigger at random. In the Jackpot game, pick from the grid to find matching symbols. You’ll then win 1 of the Mini, Minor, Major or Grand Jackpot prizes. The latter is worth at least £200,000 and normally above the half a million mark.

The design here is as classy as you’d hope. There’s excellent variety on offer from the features too which deliver something for everyone. This is a very volatile game too making it a good choice if you like high variance action. Throw in the potential megabucks on offer from the progressive jackpot element and Wonder Woman becomes one of the most playable slot games in the DC Comics superheroes collection. If you like superheroes, Playtech has plenty of options with Suicide Squad and Justice League my favourites.