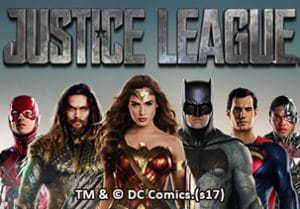 There’s already been one Justice League slot game from NextGen Gaming. This Playtech version is a much glossier affair as far as design goes. The reels include The Flash, Cyborg, Aquaman, Wonder Woman, Superman and Batman as well as their specific logo. All of the superhero symbols can land fully stacked on all 5 reels.

Batman is the top-paying standard symbol, awarding 500 coins if you land 5 on a payline. There’s also a wild that pays up to 750 coins per payline. Respins and free spins are central to the action on offer in Justice League.

Super Hero Respins feature - these are awarded randomly and can hit on any base game spin. 1 of the superheroes turns wild during a respin. In theory, you could land 5 respins in succession, complete with multiple wild superhero symbols.

Free Games feature - there are 6 different free spin bonuses on offer in Justice League. Each superhero comes with their own special extra. The free spins are triggered by landing the scatter on reels 1, 3 and 5 on the same spin. On your 1st trigger, you’ll play The Flash Free Games feature – the others will be available on subsequent feature triggers:

Cyborg Free Games feature (from 2nd trigger) - 12 free spins are awarded in this round. Just like with The Flash, any superhero that lands in the Feature Frame turns matching symbols wild. If you don’t land a superhero in the Feature Frame, a second one is added, making it that much more likely you land a superhero in 1 of them and their associated matching wilds. Once again, retriggers with 2 or 3 scatters are possible.

Aquaman Free Games feature (from 3rd trigger) - the watery superhero awards 10 free spins. Any symbol that’s part of a winner that’s in the Feature Frame turns all matching symbols wild. That Feature Frame symbols doesn’t have to be a wild, it can be anything. 2 or more scatters will get you a retrigger of 3 or 10 free spins.

Wonder Woman Free Games feature (from 4th trigger) - this round awards 7 free spins. The reels will feature between 1 and 5 Feature Frames throughout, making it that much easier to land multiple matching wilds. Again, retriggers are possible.

Superman Free Games feature (from 5th trigger) - you’ll get 5 free spins in the round inspired by the Man of Steel. The Feature frame in this feature is expanded to a giant 2x2 block. You can’t retrigger here though.

Batman Free Games feature (from 6th trigger) - just 2 free spins are awarded here. Land a superhero in the Feature Frame and ALL superheroes turn wild, not just matching symbols. These bumper clusters of wilds can serve up some spectacular action. The only downside is no retriggers are possible.

You’ll also have a shot at landing a life-changing sum of money courtesy of the DC Super Heroes Jackpots. This progressive prize is triggered at random. Once the round is activated, choose icons. Land matching Mini, Minor, Major or Grand symbols and that’s the size of the jackpot awarded. The Grand Jackpot offers you the potential to win a 7-figure sum!

The response by critics to the film version of Justice League has been decidedly lukewarm. This slot game version seems to be a much more entertaining proposition. Design wise, it’s excellent. The visuals are superbly drawn and the backing track, which comes straight from the film, has a suitably epic feel.

Playtech has packed in some excellent features too, especially the free spins feature. The highly volatile Batman Free Games feature might offer just 2 free spins but land a superhero in the Feature Frame and it can deliver some potentially spectacular action. As far as volatility goes, we’d put Justice League in the high range. Expect some big swings to your bankroll here.

If you’re thinking of watching the movie, we suggest giving Ben Affleck and company a swerve. You’ll be better served playing the slot game version of Justice League instead. If you like the game, I recommend you try the other DC Comics games with Man of Steel and Green Lantern good options.