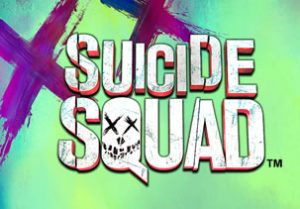 There’s a grungy look to the design here. On the purple reels you’ll see a collection of weapon-related symbols including swords, knives, baseball bats and crosses. They’re joined by 5 members of the Suicide Squad. There’s El Diablo (Jay Hernandez) and Katana (Karen Fukuhara) which both pay up to 3 times your stake per payline.

Next come The Joker (Jared Leto) and Harley (Margot Robbie) which pay up to 4 times your stake per payline. The top standard symbol is Deadshot (Will Smith) who’ll get you 5 times your stake if you land 5 on 1 of the game’s 50 paylines. There’s also a standard wild, the Enchantress logo symbol, that replaces all other symbols. Suicide Squad comes with a few extras.

Suicide Squad Wilds feature - these are triggered by landing a Suicide Squad member fully stacked on any of the 5 reels. Dog tag wilds are then added to the reels. These substitute for all suicide squad symbols (but not the weapons). If it’s El Diablo or Katana that land stacked, it’s 2 extra wilds. The Joker awards 3 wilds with Harley and Deadshot offering 4 wilds. These extra wilds can appear anywhere on the reels. They drop off the reels 1 at a time on each spin that follows.

Suicide Squad is part of the DC Super Heroes Jackpot network so you’ll also have a shot at landing a potentially mighty progressive prize with the Jackpot Game feature triggering at random. Once active, you could win 1 of the Mini, Minor, Major or Grand jackpots. The latter is guaranteed to be worth a minimum of £200,000.

You’ll no doubt have noticed that there aren’t any free spins on offer in Suicide Squad. Of course, that’s a little disappointing. You can expect to see the Suicide Squad wilds hit regularly though which keeps things moving along at a decent gallop. The Enchantress Mode feature delivers some decent potential too.

This isn’t the most exciting DC Super Hero slot game we’ve seen in terms of features. There’s plenty of action though. The design is perfectly solid but the rather repetitive rock soundtrack had us reaching for the mute button. If you’re a fan of the movie series then Suicide Squad should appeal.

Even if you haven’t seen the film, the plethora of wilds extras make it worth investigating. I’d also look into the other DC Comics slot games like Justice League and The Dark Knight which are also by Playtech.