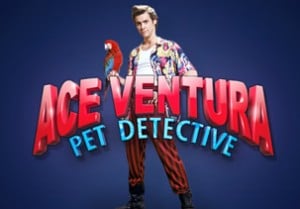 Visually, Ace Ventura Pet Detective has the same madcap feel as the original movie - the reels include a selection of cartoon style symbols featuring our hero and assorted animals in a range of zany poses. They're accompanied by bursts of dialogue from the film which greet winning spins.

Land 3 bonus symbols on reels 1, 3 and 5 and you'll trigger the Free Games feature and be awarded 7 free spins - these free spins can be boosted by a selection of 6 animal modifier symbols. Depending on which animal is selected, you'll receive a combination of extra goodies:

The red shark will get you extra free spins. The pink elephant expands the reels to offer 1,024 ways to win rather than the standard 243. The blue dolphin awards a random multiplier that will be applied to all wins during the feature. The green gorilla upgrades symbols to the top paying symbol.

The yellow bat places extra wilds on the screen. Finally, the orange pigeon awards a random win multiplier to any wild that lands on reel 3 during the feature.

Look out too for a trio of randomly triggered base game extras - in the Jungle Friends feature, extra wilds will be added to the reels. In the Sneaky Walk, 1 or more reels will be turned totally wild. If you've had a winless spin you could be in line for the Loser! feature - here you'll receive a re-spin with a 2x multiplier. If there's no winner on show you'll receive another re-spin with an increased multiplier. These continue until you find a winning combo with a 3x boost on offer.

Ace Ventura Pet Detective may not be the most sophisticated film to slot adaptation but that's hardly surprising given the source material. Whatever the limitations with the visuals, which are perfectly adequate, the extras on offer in the bonus round certainly compensate. Get a good combination of multipliers, wilds and symbol upgrades and the coins can soon start to fly. It may take a while to hunt down those free spins but they can deliver when they hit.

The Ace Ventura movie developed a devoted fan base and the range of features on show means the slot version could very well do the same. The variance is on the higher side of medium so there are big wins available (especially in the Free Games feature). For movie-themed slots, Playtech has produced some blockbuster favourites with the Marvel games being highly recommended – such as The Avengers and Spider-Man Attack of the Green Goblin.