Recommended casinos to Play The Avengers 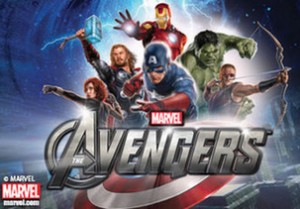 The first feature to keep an eye out for in the base game is the Avengers Assemble On Reels feature. When all 5 of Iron Man, Thor, Captain America, Hulk and Nick Fury appear on a winning payline in any order you'll win 200x your line bet (which is 10 times your stake).

The main attraction in The Avengers is the free spins offerings which are triggered when 3 or more Avengers scatter symbols appear anywhere on the reels. Once activated, you'll be transported to the 20-symbol, Wall of Heroes. You have to keep on picking until you find 3 of the same superhero symbol which will determine which free spins feature you trigger. Avoid Loki though as he'll end the feature before it's even begun.

We'll start with Captain America who offers 9 free spins. During each spin, he'll throw his shield to reveal a random multiplier ranging from between 2x and 5x.

If you pick Iron Man you'll also win 9 free spins. This time the multiplier starts at 1x and goes up by 1 every 3 spins. The reactor symbol will remain in place in the middle of reel 3 for the duration of the feature. Look out too for the extra wilds which are added.

The Hulk also offers 9 free spins. The extra here is that the Hulk will appear as a stacked wild on reel 3 throughout.

Finally, and best of the quartet, is Thor. In addition to the 9 free spins, Thor will fire lightning from his hammer to turn up to 5 symbols into random wilds per free spin. This feature offers you the best chance of securing a big payout – a whopping 7,000 times your stake!

After the feature has finished, you'll be taken back to the Wall of Heroes and given another chance to find 3 of the same symbol. Manage to do so and you'll be awarded more free spins. Once again, finding Loki brings the bonus to a premature close. If you get lucky, it's possible to play all 4 features after hitting the triggering 3 scatters just once. I’ve managed to play 14 consecutive features which a top win of over 2,330 times my stake overall!

Being a Marvel tie-in, The Avengers also offers a crack at winning any of the 4 Marvel Multi-Level Progressive jackpots. The sound and visuals in The Avengers are top end as you'd expect. The features aren't bad either, especially the Thor and Hulks bonus rounds. The overall variance is medium offering a balanced range of payouts.

Lovers of the films and comic books will find plenty to enjoy here. Even if you don't know your Tony Stark from your elbow, the excellent graphics and free spins features still make The Avengers an enticing proposition. In my opinion, The Avengers is the best Marvel slot by a long shot even though Iron Man 3 and The Incredible Hulk are worth playing too.