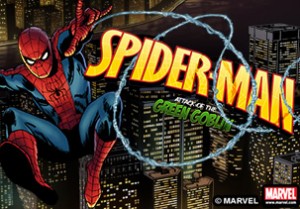 Spider-Man: Attack of the Green Goblin is all about the features. Kicking things off are 2 randomly triggered offerings in the base game. In the Spider-Man Wild, our hero will appear on the reels, firing cobwebs at a random selection of 2, 3 or 4 symbols and turning them into wilds. The second random feature is the Spidey Snapshot where Spider-Man drops in front of the reels and a camera will flash to take his picture. If this happens, you'll receive a multiplier of between 3x and 10x.

Spider-Man Attack of the Green Goblin comes with 5 more features, all of which are triggered when the Bonus symbol appears on reels 1, 3 and 5. You'll be presented with a collection of comic books. Stop the shuffle to reveal your feature.

The Ultimate Fight feature transports you to a rooftop setting where Spider-Man slugs it out mano a mano with the Green Goblin. They each start the scrap with a full power bar of 20 with the feature ending when the opponent’s power drops to zero.

A cash prize is awarded for every successful strike made by Spider-Man. Three successive strikes for either opponent awards a powerful combo strike. If our hero is successful, the prizes are bigger than if he is defeated. Prizes of up to 40 times your stake are on offer here.

Next is the City Chase where Spider-Man has to hunt down the bank-robbing Green Goblin by swinging across the city skyline. Each location offers a mini pick me bonus. Find Spidey Sense symbols along the way for added hidden prizes.

The other 3 features are all free spin features. As well as offering 20 free spins, the Hot Zone Free Games feature sees Spider-Man fire his web into a 2x2 square location. If a wild hits inside one of the zones it will remain in place. As will the Green Goblin symbol which also becomes wild with a 2x multiplier.

The final feature is the Radioactive Free Games feature which offers 15 free spins. The thing to look out for here is the Radioactive spider symbol on reel 3 which acts like a wild. When it appears a trio of identical symbols are added on reels 2 and 4, boosting the number of wilds and the chance of a big win.

Released in 2013, Spider-Man still looks really fresh. The visuals and animations are excellent. The features are pretty good too, especially the free spins features. The variance is on the high side of medium though so be careful with your bankroll. The features don't hit all that often but when they do, they offer the potential for a decent payout. There's also the Progressive Jackpot element to consider too.

If you like a range of different features, you'll find Spider-Man to your liking. Throw in the great looks and sound and it all adds up to a very entertaining superhero offering. However, I know I bang on about it but the best Marvel slot is The Avengers hands down – it features more characters and is high variance (a perfect combination).