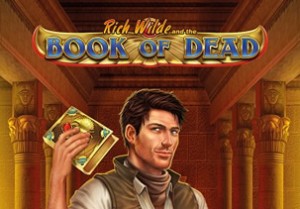 Finding ancient treasure is a high risk, high reward business and that's most definitely the case in Book of Dead. Be warned, this is an extremely volatile slot - if you can cope with the undoubted swings that accompany it, Book of Dead has much to recommend it.

The setting is the interior of a pyramid - look out for many of the usual symbols found in ancient Egyptian-themed slots including the bird god Horus, Anubis the dog god as well as a gold warrior death mask and Riche Wild himself. The archaeologist is the biggest payer of the standard symbols, offering 500 times stake jackpots if you land 5 on a single payline.

The scarab beetle book is the game's wild and scatter - land 3, 4 or 5 of these anywhere on the reels for a payout of 2, 20 or 200 times your total stake. You'll also trigger the game's only feature, the Free Spins feature, and be awarded 10 free spins. You can also retrigger the feature to give you 10 additional free spins.

As mentioned previously, Book of Dead is a very volatile slot that can deliver spectacular rewards. Expect plenty of times when you'll win very little but watch out when the feature hits as the expanding symbols can produce fireworks. Patience and careful bankroll management are required to get the best out of Book of Dead.

It's not the most spectacular slot you'll come across in terms of visuals or features, but the super high variance makes Book of Dead a very tempting proposition. Get lucky and it's capable of delivering treasure galore – up to 5,000 times your stake on every spin or free spin!

It does remind me a lot of Book of Ra Deluxe as the theme is the same as well as the bonus feature. I also recommend you try other slots where Riche Wild features such as Aztec Wild and Pearls of India.