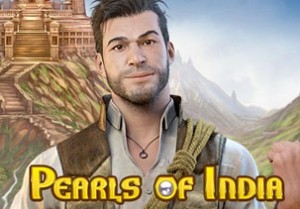 Set against a stunning Himalayan backdrop, Pearls of India is an impressively designed 5 reel, 20 payline slot. The reels feature a selection of statues of Hindu gods including Ganesh, Vishnu and Kamadhenu as well as standard playing card symbols from A to J. Riche Wild (who's a dead ringer for actor Dominic West) is the wild, substituting for all other symbols apart from the bonus and scatter. They're all beautifully drawn and sit nicely against the skyline backdrop.

The first thing you'll notice about Pearls of India is that is uses tumbling reels. After each successful spin, the winning symbols will be zapped and replaced by the symbols directly above. The cascades keep on coming as long as there's a winning combination on show. You'll notice a meter to the right of the reels. After each successful cascade a multiplier will increase, up to a maximum of 10x.

The Himalayan Temple is the bonus symbol - collect 25 of these to trigger the Temple Bonus feature. You'll be shown a treasure map. Simply select 1 of the locations shown to reveal which of the mini-features round you'll play. In Statue of Venus you have to choose pearls from the statues shown, revealing cash prizes in the process. Wheel of Brahma is a 'Wheel of Fortune' style feature. Match the rings on the wheel to win amount shown.

Finally, there's the Wall of Shiva - pick from the tiles on the wall, starting from the bottom row, to reveal prizes. If successful, you move up to the next row where bigger prizes are on offer. Find an animal and the feature ends. Prizes of up to 250 times your total bet are on offer in the Temple Bonus feature. Keep track of how many bonuses you have collected via the meter to the left of the reels.

The pearl symbol is the game's scatter – 3 of them will trigger the Free Spins feature, awarding you 10 free spins. The cascading symbols apply during the free spins too! Even better is that the multiplier values are doubled and can top 20x if you're lucky enough to get on a roll.

You collect pearls during the free spins - find five throughout the round and you'll get another 5 free games. The multipliers also go up with every set of re-spins and can reach an enormous 50x! The pearl is also an extra wild during the feature.

Play 'N Go have come up trumps in this second outing for Riche Wild - the sound and visuals are top drawer and the developer hasn't scrimped on the features either. The free spins round doesn't hit very often but can deliver some impressive results, especially if you manage to re-trigger the free spins and get the cascading multipliers rolling. The overall variance is in the medium range.

If you're after for a good looking slot, packed with features and offering the chance of big wins then Pearls of India should do the trick. I also recommend you take a look at Golden Legend which is a popular Play ‘N Go slot and has the potential for big wins.