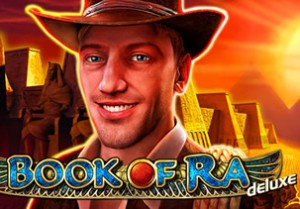 After starting life as a brick and mortar hit, Book of Ra became a firm favourite with online players too - developer Novomatic has kept much the same formula with the Deluxe version. The paylines have been increased to 10 rather than 9 and the graphics and animations have been given a much-needed overhaul.

The main attraction remains the Free Games feature which is triggered when you land 3 or more scatters (the Book of Ra) anywhere on the reels - here you'll be awarded 10 free spins with all wins doubled (i.e. 2x multiplier). You will also be able to take advantage of the expanding symbol feature during the feature.

Before the spins start, 1 symbol will be chosen at random. Whenever this symbol hits during the feature, it can expand to cover the whole reel and improve your chances of landing a decent combination.

The imagery in Book of Ra Deluxe has certainly had a makeover - the reels are set against a temple backdrop and include a selection of Egyptian-themed symbols. They include scarab beetle, sarcophagus and statue. The Indiana Jones style explorer is the top payer of the standard symbols. Find 5 in a payline and you'll pocket a jackpot of 500 times your total stake. As well as being the scatter, the Book of Ra symbol is also the wild, substituting for all other symbols.

Just like the original, Book of Ra Deluxe is a highly volatile slot - expect plenty of lengthy spells when very little appears to be happening. Careful bankroll management and bucket loads of patience are required.

If you have both of those then Book of Ra Deluxe is a relatively simple, if entertaining addition to the ancient Egyptian-themed ranks. It's certainly a step up from the original but still offers the same blend of high variance thrills that should keep serious treasure hunters on their toes.

This is one of the most popular slots of all time and for good reason – I recommend you try Novomatic’s Lord of the Ocean which is very similar in terms of gameplay. If ancient Egyptian themes appeal to you, Pharaoh’s Fortune by IGT is also a land based classic and hugely popular.