Slots Novomatic Slots One Hundred to One Slot

Recommended casinos to Play One Hundred to One 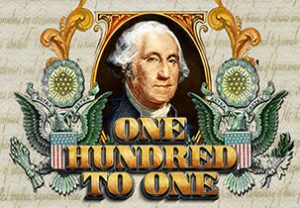 The set up in One Hundred to One is very unusual. On the reels you’ll see only 4 different symbols. There’s a 0 which doesn’t pay anything and is effectively a blank. It’s joined by a $ and a bar which pay 0.3 and 0.5 times your total stake if you land 5 in a line. You can expect to do that regularly given the 100 paylines and the shortage of symbols.

There are plenty of opportunities to add more free spins to your total in the feature too. The process is exactly the same as the base game with each 5 of a kind Free Spins winner adding an extra free spin to your tally. Boosting your winning chances here are multipliers. All newly triggered free spins then come with a 2x multiplier – after these play out, the multiplier rises to 3x, 5x and finally 10x. There’s up to 600 free spins to be won altogether.

Like most slot games in the Novomatic catalogue, the gameplay in One Hundred to One is rather simple. The same is true of the design which has a real retro flavour. The imagery is akin to an old-fashioned arcade game and is a million miles from the high-definition titles you’ll see today.

The backing track is Novomatic’s usual ZX81 style offering in the base game but turns into something rather more soothing once the Free Spins feature activates. If you’re after slick design and funky features, then you won’t find them here.

If on the other hand you want simple but unusual gameplay that reminds you of a vintage brick and mortar-style casino game, then that’s just what you’ll find in One Hundred to One. With maximum wins of 500 times your stake on each free spin (with the 10x multiplier), it’s not appealing enough. I would rather play Kingdom of Legend or Eye of the Dragon (both from Novomatic) which offer bigger potential wins.