Recommended casinos to Play Eye Of The Dragon 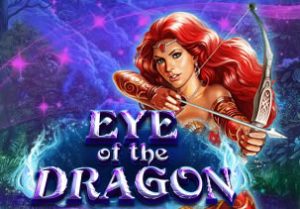 Eye of the Dragon has the look and sound of a classic Novomatic slot game. The plain black reels are set against a forest backdrop. You’ll see lower value A to 10 royal values alongside a white horse, a white tiger and a bearded warrior. The best symbol is the flame-haired warrior woman taking aim with a bow and arrow. Land 2, 3, 4 or 5 of her on a payline and you’ll pocket an award equal to 1, 10, 100 or 500 times your total stake.

The dragon’s eye is the wild - it can land on all 5 reels and substitutes for all other symbols. Land 3, 4 or 5 of them in combination and awards of 2, 20 or 200 times your stake are on offer. The dragon’s eye also acts as the scatter and landing 3 or more of them on the same spin trigger’s Eye of the Dragon’s only offering – the Free Games feature.

On offer here are 10 free spins. Before the feature starts, 1 symbol is chosen at random. This will be the special expanding symbol. Whenever this hits during the free spins round, it expands to fill the whole of that reel. If you get a few on a free spin, it will lead to the same symbol predominantly showing on the reels. If you get a high value symbol, it could result in huge winnings.

Eye of the Dragon is just what we’ve come to expect from a Novomatic game. This is one of the developer’s more stripped back games as far as design goes. There’s nothing too flashy about the visuals and the soundtrack is the old favourite bangs and bleeps affair.

The gameplay is equally basic. The base game action is pretty vanilla but the Free Games feature has potential thanks to the expanding symbol. Land a high value symbol there and the coins can quickly build. The variance isn’t stratospheric but it’s high enough – you can win up to 500 times your stake on every spin.

This is a typical Novomatic game. There’s nothing here that you won’t have seen many times already. If you like the Austrian developer’s unique style, then Eye of the Dragon won’t disappoint. I recommend you try Book of Ra Magic which basically uses the same game engine but allows you benefit from up to 9 special expanding symbols in the feature.