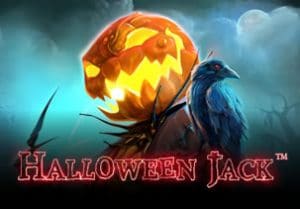 Many Halloween slot games have a comic feel. That’s certainly not the case here as the imagery is very chilly. A haunted graveyard is the setting. On the reels you’ll see lower value royal symbols which are being grabbed by wandering zombie hands. They’re joined by horseshoes, ravens, bats and horses. The best paying standard symbol is the mysterious woman who’ll get you 1, 10 or 50 times your stake if you land 3, 4 or 5 on a payline. Halloween Jack comes with 3 extras:

Walking Wild feature - the Jack O’ Lantern is the wild. Whenever 1 of them appears, a re-spin is awarded. The wild lantern then moves 1 reel to the left with each re-spin until it drops off reel 1. If the wild forms part of a winning combination, the payout gets a 3x multiplier boost and is trebled.

Free Spins feature - land 3 or more of the scatter (the ornately designed black box) on the same spin to trigger this round. On offer here are 10 free spins. The Walking Wild feature is in play as in the base game meaning you can get plenty of re-spins as well as 3x multipliers.

Keep a special eye out for the oil lanterns that can hit on reel 5 as these trigger the Jack ‘o’ Lector feature. Each time they land, they’re collected in a meter. Collect 3 lanterns and you’ll be awarded a stacked Hell Hound Wild. Collect 6 and you’ll unlock the Stacked Jack-O-Lantern Wild – with 3 and 6 lanterns collected, the Walking Wild feature applies with free re-spins to follow.

Find 9 and the Grim Death Expanding Wild comes into play – this wild reel moves 1 reel to the left with every free spin. As in the base game, a win involving a wild will give you a 3x multiplier.

Halloween Jack is a deliciously creepy slot game. The dark visuals are very nicely done and there’s a menacing soundtrack playing in the background as you spin. Expect the occasional shriek and scream too.  There’s nothing scary about the gameplay which is perfectly solid. The Walking Wild re-spins appear regularly and provide plenty of life to the base game. The Free Spins feature has plenty of potential if you manage to unlock the wild extras.

There’s a proper scary feel to the design in Halloween Jack. If you’re looking for a slot game to get you in the mood for the Halloween festivities, then you won’t go too far wrong here. Be warned though – it’s highly volatile but does offer payouts of 3,000 times your stake on every spin/re-spin/free spin. If you like the Halloween theme, Blood Suckers II (by Net Entertainment) and Maji Wilds (by Playtech) are recommended.