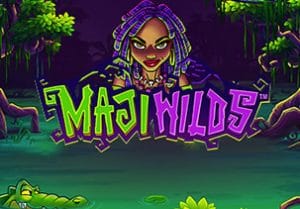 The design here is done cartoon style. The reels are set against a swampy backdrop and include A, K and Q symbols made from bones alongside skulls, bottles of potion, crocodiles and a mysterious woman. The masked shaman is the most rewarding symbol. Land 3, 4 or 5 of him in a payline and you’ll win 75, 150 or 500 coins.

The playing card symbol is the wild. It replaces all other symbols and offers awards of 100, 300 or 1,000 coins if you land 3, 4 or 5 in combination. These cards also have some magical powers. Whenever 1 of them lands, you will trigger the Wild Cards feature - a deck of 5 cards are shuffled to reveal 1 of the following:

A new payout is made after the new wild powers have taken effect. That’s it as far as features go. There aren’t any free spins on offer here. All the action comes via the Maji Wilds. Expect them to hit at regular intervals though. The minimum 50p per spin is pretty high – the variance is in the middle.

Visually, Maji Wilds is nicely done. The New Orleans jazz soundtrack wouldn’t have sounded out of place in the classic James Bond film Live and Let Die. With its limited range of extras, this isn’t the most exciting slot game you’ll see. It’s well designed though and the wild extras offer plenty of play.

If you’re looking for something spooky but a little different around Halloween then Maji Wilds offers just that. Alternatively, I suggest you try some of Playtech’s branded titles with The Matrix and RoboCop good options.