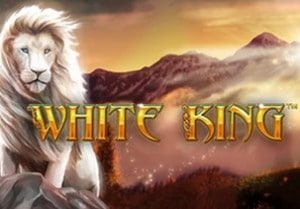 White King is a visual delight - the images are superbly drawn and include a variety of lions, lion cubs, eagles and crowns. The animals pay 250 times your bet if you find 5 symbols with the crown offering 400 times your payline for a similar 5 symbol combo.

The White King (lion) acts as the wild and substitutes for all symbols except the scatter. The lion always appears as a stacked wild and can hit on each of the 5 reels. It's the game's biggest payer, offering jackpots of 1,000 times your line bet if you find 5 in an active payline.

White King comes with a Free Games feature which is activated when the White King Logo scatter appears anywhere on reels 2, 3 and 4. The Majestic Nights Free Game awards an initial 5 free spins with extra White King wild symbols added to the reels. It's possible to re-trigger the free spins if the scatters appear during the feature. There's no limit to the number of times you can trigger the re-spins either.

The variance in White King is high. The free spins don't hit very often but can be profitable when they do arrive, especially thanks to the extra wilds and the stacked wilds which also operate during the free spins. White King is lovely to look at and the sound fits the mood nicely. Not too intrusive but complementing the game's theme. The gameplay is smooth too. Opt for turbo play and the action can really rattle along.

Other Playtech slots may have more features White King but keeping it fairly simple works here though. The variance is high so you'll need patience and good bankroll management. Get lucky in the free spins feature though and there's a chance that you'll be walking away with a bumper haul of coins. If this is your kind of game, Sultan’s Gold or Great Blue by Playtech are also highly recommended.