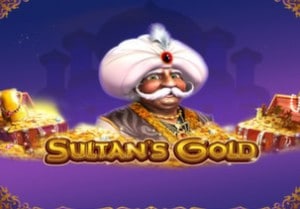 Look out for the Sultan, a beautiful princess, magic lamps and scimitars on its reels. The biggest payer is the Sultan who offers payouts of 5,000 times your line bet if you manage to find a five symbol combination. The Princess pays up to 2,000x with the sword and the magic lamp offering 750x.

The Sultan's Palace is the most important symbol on show. It acts as a wild in the base game, boosting your chances of hitting a winning combo. Find 3 or more Palaces and you'll trigger the Free Games feature. You'll be awarded an initial 10 free spins complete with a random scatter.

A reel will be spun to determine which symbol acts as the mystery scatter. Once selected it will pay out if multiple symbols appear, even if they're not together in a traditional payline. So for example, if the Sultan is your mystery scatter, your stake will be doubled if you find 2.

Hit 3 and you'll receive 100 times your stake, four and it's 1,000. If you're lucky enough to hit five you'll win 5,000 times stake! Even the lowly playing card symbols can hit big in the free spins round. It's possible to retrigger the free games an infinite number of times if 3 or more of the Sultan's Palace symbols appear. The payouts can absolutely rocket if you retrigger multiple times.

And in terms of features that's it. It's simple but has the potential to be very effective, if high risk proposition. The blocky, cartoon-style graphics in Sultan's Gold are nothing spectacular even if the Middle Eastern soundtrack is a catchy little number. This slot is all about the potential big payouts and the key to that is triggering the feature. The variance is high so you need to have the bankroll to cope with that.

Like the Arabian Desert, there will be lengthy dry spells. Get on a roll and retrigger the free spins with the mystery scatter and you could float away with a magic carpet full of coins. It’s one of my favourite Playtech slots and it does remind me of Desert Treasure II in terms of the soundtrack but more like Novomatic’s Book of Ra Deluxe in terms of gameplay.