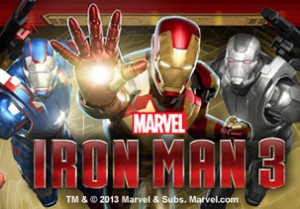 Top of the features list is the Hall of Armor Free Games feature which is triggered when 3 or more Iron Man scatter symbols appear anywhere on the reels. Once active, you'll have the choice of 3 different game modes, each offering a different combination of free spins and extras.

Next is the Mark 42 Mode which offers 10 free spins with frozen wilds which will remain in place for 3 spins. Finally there's the War Machine Mode which gives 8 free spins with random wilds. It's possible to trigger 3 extra spins in each mode if the appropriate scatter appears on reel 3. Of the three choices, we'd plump for the Mark 42 mode as the frozen wilds can offer some potentially big wins.

The other major feature is the All Systems Go Re-Spin feature which becomes active when the Mark 42, War Machine and Iron Patriot scatters appear anywhere on reels 1, 3 and 5 respectively on the same spin. The 3 scatters will remain in place and pay as two-of-a-kind for the respin. While not offering the potential riches of the Hall of Armor, it can certainly provide a tidy little boost.

You'll also have a shot at the Marvel Multi-Level Mystery Progressive Jackpot. Randomly activated it offers four levels of payout if you manage to match three jackpot symbols on a 4x5 grid. The top end sound and visuals in Iron Man 3 are just what you'd expect from a major film tie in.

The features are pretty good too with the Hall of Armor Free Games the best route to winning big. As the variance is on the high side of medium, that won't happen too often. When you can get the free spins, it's certainly possible to fly off with a terrific haul of coins.

Like the movie it's based on Iron Man 3 won't go down as an all-time classic - it's a decent enough offering though and should provide plenty of entertainment. That said, I found Iron Man 3 to be a mash-up of various Playtech slots including Gladiator, Thor The Mighty Avenger and obviously Iron 2. For some reason, it doesn’t appeal to me as I’d much rather play The Avengers or the aforementioned Thor The Mighty Avenger.