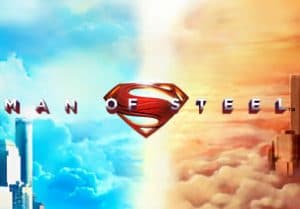 As you'd expect from a movie tie-in, the design of Man of Steel is excellent - the lower value symbols include Clark Kent's letter box, his black-rimmed glasses, a camera, a copy of the Daily Planet, a school bus and a fighter jet. They're joined by characters from the film played by Lawrence Fishburne, Kevin Costner and Diane Lane. The famous S logo is the most rewarding standard symbol – 5 of these on a payline pays 1,000 coins.

There are 5 potential wilds - a standard wild, General Zod, 2 of his warriors and Superman himself. Each of them offers payouts of up to 1,000 coins. Man of Steel isn't just pretty to look at - it comes with plenty of bonus features too:

Superman vs General Zod Shifting Wilds feature - whenever the Superman wild lands on the reels, he will move 1 place to the right on each subsequent spin until he drops off the reels. The same applies to General Zod - instead of moving to the right, he shifts 1 place to the left with each spin. Watch out when the 2 land on the same row!

Battle for Earth Free Games feature - to trigger this feature, you'll need to land shifting Superman and General Zod wilds on the same position. The Man of Steel will then go in to battle with the General and his warriors. The shifting wilds are again in play here - when Superman lands next to Zod or 1 of his gang, the pair will fight. Every battle creates extra wilds which are added to the reels and boost your chances of creating a winning line. The free spins continue until 1 of the baddies defeats Superman.

Krypton Free Spins feature - land the Krypton Bonus scatter symbol on reel 5 to trigger this feature. Here you'll be awarded 7 free spins. These are played on a new set of 50 payline reels and use higher paying symbols. Look out for Jor-El (Russell Crowe) who is wild and locks in place whenever he hits. You can get up to 10 frozen wilds for all free spins! It's possible to retrigger the feature which gives you an additional 7 free spins – the Jor-El wilds are removed with new ones added for the extra 7 free spins.

World Engine Bonus feature - the Bonus symbol on reel 5 triggers this feature. A massive explosion will rock the reels and in the process, reveal up to 7 extra wilds. A new payout is then made with the extra wilds in place.

Man of Steel is part of the DC Super Heroes Jackpot network - there are 4 potential jackpots, each of which can be triggered on any spin. Once active, pick from the matrix. Fill a collection area with the same colour and you'll win 1 of the Mini, Minor, Major or Grand jackpots. The latter will pay out a minimum of £1 million!

We were a little underwhelmed by the movie version of Man of Steel but found this slot game adaptation much more to our liking. It looks and sound excellent and comes with plenty of interesting features. The spreading wilds keep the base game action high.

The Battle for Earth Free Games feature is an excellent take on the free spins round as we managed to land over 50 free spins in 1 go and pocketed over 200 times our stake in the process. The other extras are harder to come by but can certainly pack a hefty payout punch. I do like the Krypton Free Spins feature the best with potentially 10 locked wilds for every single free spin.

There are already plenty of superhero themed slot games on the online casino shelves. There's always room for a quality addition and Man of Steel is just that. Combining fine design with very playable features, this outing for Super Man is a winner. If you want to play other games in the DC Super Heroes Jackpot network, Batman & The Penguin Prize is worth playing.