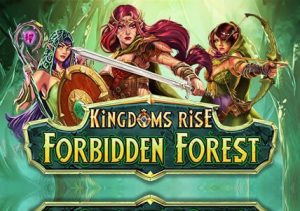 After the dusty deserts of Sands of Fury, Playtech has headed to greener pastures in Kingdoms Rise: Forbidden Forest. The setting might be very different but you can expect a similar blend of classy design and exciting features. Like the other slot games in the series, there’s a high spec look to the visuals. A magical woodland is the setting. You’ll see 5 lower value gemstones, a bear and a big cat and three mighty female warriors. The sword-wielding woman in red is the best payer, awarding 2.5, 7.5 or 20 times your stake if you land 3, 4 or 5 on a line. The jade gem is the wild. This replaces all the standard symbols.

The main feature, the Owl Respins feature, is triggered by landing the gold eye mask scatter. Land 1, 2 or 3 of them on the same spin and you’ll receive 2, 4 or 12 respins. The owl mask scatter transforms into a wild for those respins and can land anywhere apart from reel 1. Hope to see a feather land on reel 3 as this adds 2 extra respins to your total.

On any spin you could see gold token symbols appear. These are collected in a meter whenever they land. Once you have 500 or more tokens, you can head to the Kingdoms Rise Shop and by a bonus feature.

Like the other Kingdoms Rise slot games, Kingdoms Rise: Forbidden Forest offers a chance to land 1 of 3 progressive jackpot prizes. These can strike at random on any spin and if you’re playing at any stake level. The biggest is the Epic Jackpot which has no limits or restrictions.

Playtech has created another very playable slot game in Kingdoms Rise: Forbidden Forest. The sound and visuals are superb. Take the token element out and the gameplay is rather simple. We landed the respins regularly though which kept things ticking over. If you fill the reels with the top symbol, you will pocket a 11,520 times stake payout!

Collecting tokens can take a long time but if you have the patience the Night Owl can deliver some top action. Put that together and the Forbidden Forest is worth a visit. I would also recommend you try Kingdoms Rise: Guardians of the Abyss which is the best Kingdoms Rise slot game in my opinion.