Recommended casinos to Play Kingdoms Rise: Guardians of the Abyss 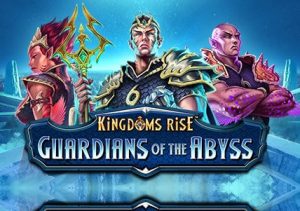 Kingdoms Rise: Guardians of the Abyss: Dive in

After the desert and woodland tribes had their go, it’s time for the underwater Kingdom to Rise. This latest instalment in Playtech’s epic fantasy franchise series boasts cracking sound and imagery as well as a top free spins feature. An underwater kingdom based on the ocean floor is the setting for Guardians of the Abyss. On the reels you’ll see gemstones, jewellery and the 3 Guardians – Jax, Akali and Odeon. Land 3, 4 or 5 of the latter in combination for a payout of 8, 20 or 40 times your stake. 200, 500 or 1,000 coins. There’s also a wild that offers awards of up to 50 times your stake per payline.

Land 3 seashell scatters on the same spin to trigger the Guardian Bonus. The first shell will reveal which of the 3 potential free spins features you’ve been awarded. The second determines the number of free spins while the third decides the power of the feature:

You’ll see gold tokens appear in the base game. Each time they land, they are collected. Once you have 500 or more in the bank, you’ll have the option to carry on collecting or to buy the extra Wild Vortex Respins feature.

Wild Vortex Re-Spins feature - in this bonus, a vortex can appear on reels 2, 3, 4 or 5 and throw out a selection of wilds onto random positions on the reels. The wilds shift 1 position closer to the vortex with each respin. When a wild symbol reaches the vortex, it’s sucked in and removed from play. The respins continue until all the wilds are removed. Buy the feature with 300, 750 or 1,500 tokens and you’ll receive 1, 2 or 3 extra wilds.

Kingdoms Rise: Guardians of the Abyss: Not Abyss-mal

This is probably the most straightforward of the first 3 Kingdoms Rise slot games in terms of gameplay. The free spins can really come into their own if you get a good power level from the all-important third shell. With top wins of 1,250 times your stake, a 5 multiplier can result in a 6,250 times stake win!

The Wild Vortex Respins feature can deliver some top action too is the wilds fall nicely. Add the classy design and jackpots into the mix and Kingdoms Rise: Guardians of the Abyss becomes a very playable option. You should try Kingdoms Rise: Forbidden Forest where you can win 11,520 times your stake on every spin.