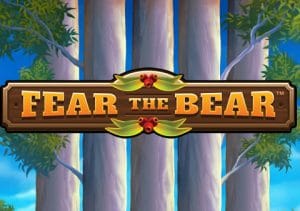 The design in Fear The Bear is simply done. Set against a lakeside backdrop, you’ll see A to 9 symbols alongside a collection of animals. They include frogs, lizards, platypuses and moles. The best of the standard symbols is the bird. Land 5 of these on a payline and you’ll pocket an award equal to 2.5 times your total stake.

Central to much of the best action on offer in Fear The Bear is the koala which is the game’s wild. As usual, this replaces all the standard symbols when it appears on reels 2, 3 and 4.

Whenever a wild lands, the koala clambers up the tree on top of the reels. Once you have 4 koala wilds in a single tree, you’ll trigger the Wild Drop feature. The quartet of wilds drop down to create a stacked wild. It’s possible to land multiple stacked wilds on the same spin which can lead to some cracking results – i.e. up to 3 wild reels.

The other extra in Fear The Bear is the Free Games feature. It’s triggered by landing 3, 4 or 5 scatters on the same spin. After a payout of 5, 20 or 50 times your stake, you’ll then go on to play 10, 15 or 25 free spins. Re-triggers are possible here too meaning up to 50 free spins. The Wild Drops are in play during the free spins round too which can lead to some multiple stacked wilds.

This trip to the Aussie bush is a straightforward one. The design and gameplay are simply done. The visuals won’t be winning any awards here. It looks and sounds rather basic. Even factoring in the wild reels the top payout stands at some 125 times your stake per spin or free which won’t be enough to please some jackpot hunters.

If you’re after a low variance slot game with a wild animal theme, then that’s just what you’ll find in the not so frightening Fear The Bear. It’s not a journey we’ll be racing to make though. I would rather play other Playtech slot games like Raiders of the Hidden Realm or Age of the Gods: Ruler of the Seas.