Slots Playtech Slots Age of the Gods: Ruler of the Seas Slot

Recommended casinos to Play Age of the Gods: Ruler of the Seas 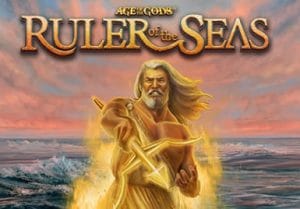 Like the other slot games in this franchise, there’s a high spec look to the design in Age of the Gods: Ruler of the Seas. With the sea and sky in the background, the reels are made up of lower value royal symbols as well as Pegasus the flying horse and a quartet of Greek gods and goddesses.

Poseidon is the most rewarding standard symbol, paying 3.33 times your stake if you land 5 in a line. Better still is the wild which delivers payouts of up to 8.33 times your stake per payline. Keep a special eye out for Poseidon’s trident which is the scatter. This is crucial to activating the wealth of extras on offer in Age of the Gods: Ruler of the Seas.

In game Respin features - land 2 scatters on the same spin and you’ll receive a respin on an expanded 6 row, 60 payline machine. These respins can deliver some modifier extras too. Look out for special framed symbol positions. Extras are awarded depending on their colour and which symbol lands in the frame.

Land 3 trident scatters and you’ll land the free spins round. There are 5 options here. You have to trigger the round multiple times to unlock all of them. In all cases, you’ll receive 5 free spins to start with. These take place on a 5 reel, 8 row, 90 payline machine. Each set of free spins comes with the modifiers linked to their equivalent respins. The framed symbol positions are again key:

Like the other slot games in the series, Age of the Gods: Ruler of the Seas comes a progressive jackpot element. This round can trigger at random. In the bonus game, pick 3 matching jackpot symbols and that’s the prize awarded.

Age of the Gods: Ruler of the Seas is one of the better slot games in the Age of the Gods series. The sound and visuals are as well done as you’d expect and there’s plenty of range to the gameplay. If you like variety, then you won’t be disappointed here.

Variance wise, it’s medium to high with top wins of 7,500 times your stake on each respin or free spin involving Medusa’s multipliers. For me, it’s 1 of the better Age of the Gods titles alongside Age of the Gods (the original). If you like Poseidon though, Age of the Gods also features this god of the seas.