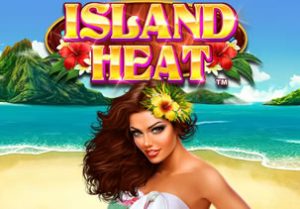 The design in Island Heat is very simple done. With a beautiful beach, clear blue seas and volcanoes in the background, the reels are watched over by a smiling local woman. On those reels you’ll find A to J royal values alongside 5 higher paying symbol that all relate to the tropical theme.

In order of value are flowers, a pineapple, a parrot and a dolphin. Top of the payers is the woman. Land 5 of these in combination and you’ll receive a payout of 1.66 times your total stake. Before each spin 1 symbol will be chosen to be the Mega Stack for the Mega Stacks feature. This symbol will then, you’ve guessed it, appear fully stacked.

The totem flanked by flaming torches is the wild. This appears fully stacked and replaces all of the standard symbols. The wild can be a pretty good payer in its own right too. Land 2, 3, 4 or 5 of these and you’ll bag an award of 0.5, 2, 10 or 33.3 times your stake.

Like many Novomatic slot game, the range of extras in Island Heat is limited. The only bonus is the Free Games feature which is triggered by landing 7, 8 or 9 scatters on the same spin. That sounds like a lot but the scatter spins in stacks on the middle 3 reels. Your reward is then 8, 16 or 32 free spins as well as a payout of double your total stake. The stacked symbols are in play during the feature too.

This is a typical, old school Novomatic slot game. There’s a laid-back feel to the imagery and soundtrack that’s matched by the gameplay. This isn’t one of the developer’s most volatile titles. The variance here is in the medium range with top wins of 1,000 times your stake if you fill the reels with wilds.

Island Heat isn’t exactly a scorcher but it’s a perfectly adequate, if rather simple slot game. If you want a beach theme and more explosive wins, Sam on the Beach by ELK Studios is worth putting your shorts and flip flops on for.