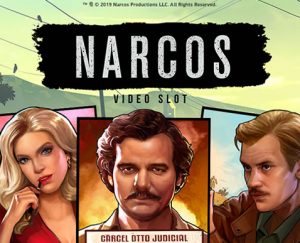 There’s a slightly unusual look to Narcos. The imagery is done comic book style but there’s an almost photorealism quality to the symbols. It’s very well done. The lower value royal symbols are embellished with bricks of cash, pistols, automatic weapons and grenades.

They’re joined by a light aircraft, a pink flamingo and 4 higher value character symbols. The best of these are DEA agents Steve Murphy and Javier Pena, both of whom pay 1, 4 or 15 times your stake if you land 3, 4 or 5 on adjacent reels.

Those same amounts are on offer from the DEA agent’s badge which is the game’s wild. Any wild that forms part of a winning combination turns into a Walking Wild and triggers the Walking Wild feature. This moves 1 position to the left with each spin that follows until it drops off the reels. The Walking Wilds can land in the base game or the free spins. More on them shortly.

Drive-by feature - this is activated at random. A car pulls up behind the reels and a gunman lets off a volley of bullets. These transform some of the higher value symbols into wilds. A new payout calculation the follows.

Locked Up feature - to activate this round, you’ll need to land 3 of the Escobar Locked Up Poster symbol on the same row. These 3 symbols are moved together and then given a value of between 1 and 10 times your bet. You’ll then receive 3 free spins where the reels feature just Locked Up and Golden Locked Up symbols.

If a standard Locked Up symbol joins a winning cluster, it joins up and the free spins tally reverts to 3. Land a Golden Locked Up symbol adjacent to a win and it awards an increased starting coin value, a multiplier of 2x or 3x or symbol upgrades that deliver bigger rewards.

Free Spins feature - land the scatter on reels 1, 3 and 5 on the same spin and you’ll receive 10 free spins. On any of them, you could see a standard high value symbol randomly transform into a Walking Wild. If any Walking Wilds are on the reels when your allocation of 10 free spins is over, extra free spins are awarded until they’ve dropped away.

Net Entertainment has plenty of experience of transferring movies and TVs into slot games and they’ve done a fine job with Narcos. The classy comic book design is superbly done and, as you’d hope for a game with this theme, there’s no shortage of action here.

The Walking Wilds, Drive-by wilds, Locked Up Spins and free spins combine to deliver some potentially explosive gameplay. Variance wise it’s balanced with total wins of 1,002 times your stake with the Walking Wilds feature. If you get the best possible scenario in the Free Spins feature, you could be stashing away 1,506 times your stake.

Fans of the show should be pleased with what they find here. Even if you’ve never seen Narcos, the top-notch design and range of features make this another top branded slot game. I also recommend you try Vikings (also by NetEnt) which is more volatile and offers wins of 10,000 times your stake on each free spin.