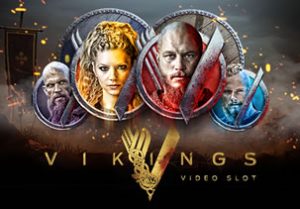 You can usually rely on a Net Entertainment TV adaptation to be well designed and that’s definitely the case here. Set against a misty mountain backdrop, the reels include metal A to 10 royal values as well as a quartet of characters from the show (Floki, Bjorn, Lagertha & Ragnar). It all looks suitably menacing. Vikings comes with 3 bonus features.

Vikings is another high spec TV adaptation from Net Entertainment. The design is just as glossy and top end as you’d expect from a high-profile tie-in. Net Entertainment hasn’t shirked on the gameplay though and there’s an impressive range of extras on offer here as well as plenty of innovation.That’s certainly true of the Raid Spins feature where the expanded reel set and multiple Hotspots can serve up plenty of action. If you’re a fan of the TV show, then Vikings is a must play. Even if you’ve never seen the source material, the classy design and quality extras make this slot game well worth investigating. I also recommend you try Planet of the Apes (from Net Entertainment) which is superb.