Recommended casinos to Play Creature From The Black Lagoon 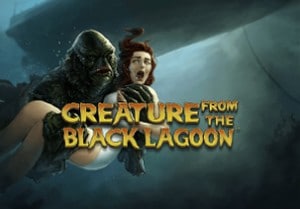 Centring on a prehistoric, half-human, half aquatic being known as 'Gill-Man', the Creature from the Black Lagoon slot has the look of a classic B movie. And while it may take its inspiration from the 1950s, the graphics has a vintage feel to them as you are taken into the Amazon.

As you'd expect from a slot created in conjunction with one of the world's biggest movie studios, Creature from the Black Lagoon looks great. The graphics, which include the 4 central characters from the film plus a series of diving related props, are nicely designed. The animation is smooth and the soundtrack has an old school, Saturday afternoon movie feel.

Kay is the most rewarding symbol with 5 in combination giving you 37.5 times your total stake. There’s also a wild symbol which replaces all symbols bar the scatter and target symbols (more on the latter below).

When the Creature from the Black Lagoon wild symbol lands on the reels, it becomes a sticky wild and triggers the Re-Spin feature. A free re-spin then follows with the triggering wild locked in position. If more wilds land, they also become sticky with more re-spins to follow. The re-spins keep on coming until no more new wilds appear.

The main attraction is the Free Spins feature where you'll be challenged to rescue our heroine Kay from the underwater lair of 'Gill-Man'. To trigger this feature, find 3 or more free spin symbols anywhere on the reels. 10 free spins are awarded with 3 symbols, 4 symbols offers 15 free spins with 20 free spins on offer for 5 symbols.

Keep a special eye out for the Target symbol on reel 5. The more Target symbols collected, the more damage is inflicted on 'Gill-Man' and the bigger the potential payouts. The health meter in the bottom right hand corner will let you know how you're doing in this challenge.

There are 4 levels in the Free Spins feature in all, offering a variety of Wilds, Spreading Wilds and even more free spins and potentially bigger payouts:

Creature from the Black Lagoon was released in 2013 and is available to play on mobile and tablet devices from January 2020. It’s quite a simple slot really which looks good and has the potential to give you plenty of wilds in the Free Spins feature. With an RTP of 96.47%, this high variance game can pay up to 750 x stake on each spin.

However, Creature from the Black Lagoon is great entertainment wise and a decent game to play. If you want bigger potential wins or like other movies, there are plenty of slots to choose from – my favourites including Playtech’s Gladiator Road to Rome and Microgaming’s Jurassic World.