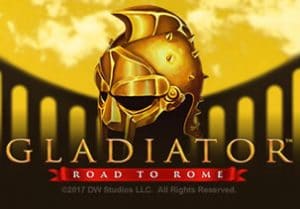 The design in Gladiator Road to Rome is simple but effective - with a Roman amphitheatre in the background, the symbols appear on stone blocks. You’ll see lower value playing cards alongside characters from the film. The best of these is Joaquin Phoenix who plays Commodus who awards up to 20 times your stake per payline. The gladiator becomes wild when it lands in a fully stacked formation. Land 5 of these on a payline and you’ll pocket 40 times your stake.

Land 3, 4 or 5 weapon scatters and you’ll trigger the Colosseum Bonus feature - you’ll be awarded 5, 8 or 12 free spins to start with. You’ll then be offered a selection of shields which deliver a series of multiplier extras. They include extra free spins, 2x and 3x multipliers, payout boosts for wins featuring a special chosen symbol, extra wilds, scatter pays for a chosen symbol and nudges which turn the gladiator into a wild.

The free spins will then begin with all of your extras in play. If you’re lucky, you could get up to 21 free spins or a multiplier up to 9x for example. The symbol boost is quite significant as a randomly chosen symbol will increase in value by 5 times!

Land 3 helmet bonus symbols and you’ll activate the Gladiator Bonus feature - 9 helmets will appear to award bronze, silver and gold prizes. It’s here that you’ll have a shot at winning a life-changing sum of cash courtesy of the progressive jackpot element. Find 9 gold helmets and you’ll win the big one. All other combinations of helmets will give you cash prizes.

We enjoyed the original Gladiator movie and this slot game version is an impressive adaptation. The visuals aren’t as flashy as you’ll find in some games but they do the job perfectly well. Likewise, the soundtrack which has a suitably sweeping, orchestral feel.

The features stack up well too. The modifiers in the Colosseum Bonus feature means that there’s plenty of variety on offer and you can expect something different every time you trigger it. We landed it fairly regularly too. We’d put the variance in the medium to high range.

The ancient theme is a popular one and one of our favourites. Gladiator Road to Rome offers something a little different. If you enjoy this genre, it’s certainly worth entering the arena and joining the battle. Compared to the original Gladiator Jackpot or Gladiator slot games, it’s a step up as the Colosseum Bonus feature has been improved with a bigger winning potential.

With a symbol payout boost and 2 3x multipliers, you could get the wild which would result in payouts of up to 30,000 times your stake if you manage to get all wilds on the screen! If you like movie tie-ins, Playtech has plenty of options with Ace Ventura Pet Detective and Justice League amongst the better ones.