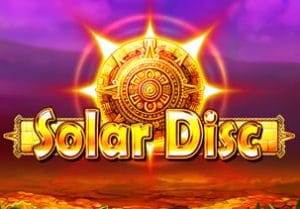 The set up in Solar Disc is unusual for an IGT slot game - for starters, there are 6 reels instead of the standard 5. Those reels are set against a sun-kissed desert backdrop and include a selection of primitive objects and animals. You’ll see coins, keys, totem masks and a gem-encrusted chalice. The most valuable symbols are the bear and the big cat which pay 5 times your stake if you land 6 on the same payline.

Central to the action is the ornately designed solar disc symbol. When this lands, it will reveal a standard symbol. All instances of that symbol on the reels will then turn wild. Better still is if you’re lucky enough to see more than 1 solar disc on the same spin. This can turn multiple symbols wild with potentially spectacular results. This is known as the Solar Disc feature.

Hope to see the Bonus symbol on reel 1 and a solar disc on any other reel on the same spin as this triggers the Free Spins Bonus feature - you can then look forward to 10 free spins. You’re guaranteed to land at least 1 solar disc symbol on each of them so expect to see plenty of wilds throughout the round.

Solar Disc is a simple game but a rather innovative one. The transforming solar discs deliver plenty of action in both the base game and the Free Spins Bonus feature. Land multiple discs on the same free spin you could set off a wild explosion with payouts to match.

You might expect a slot game called Solar Disc to be red hot as far as volatility goes. That’s not quite the case here though. The variance is in the medium range and offers a balance between frequency and size of payouts – in fact, you can win 500 times your stake on every spin.

We’ve sometimes been a bit underwhelmed by what IGT has to offer. With its unusual extras, Solar Disc is certainly one of their better slot games. Get lucky with those transforming wilds and you’ll be beaming. If you want something more volatile, the mesmerising Electric Tiger should be played.