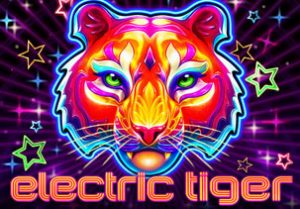 The design in Electric Tiger is nicely done and about as far from a safari as you could imagine. You’ll see neon, gemstone style symbols spinning around the reels. They include cherries, lemons and melons, oranges and plums, a 4-leaf clover, a horse shoe and bell. The pink diamond is the most lucrative of the standard symbols - land 3 5 of these and you’ll pocket 32 times stake.

Replacing all of the standard symbols is the Electric Tiger which is the wild. It can land on all 5 reels and expands to fill the whole of the reel whenever it hits – this is known as the Expanding Wilds feature. A 5-in-a-row combo will net you a cool 120 times stake reward.

There isn’t a huge range of features on offer here. The spin the wheel bonuses offer some very decent potential though. The Gateway Bonus which opens up the 2 features is triggered by landing a star symbol on reel 3. You’ll then see either an arrows symbol which triggers the Wheel Shot Bonus feature or a Bonus symbol which activates the Wheel Bonus feature:

Wheel Shot Bonus feature - this is a multi-level prize wheel bonus. You’ll start with 1 spin on the lowest paying wheel. Cash values are attached to arrows that point left and right. If you land an arrow that points to the right,, you’ll win the cash prize attached and progress to the next wheel.

There are 4 of these in all with the prizes on offer increasing throughout. If you land on an arrow pointing left, you’ll move back a wheel. The round continues until you hit a left pointing arrow on wheel 1. In total, you can move between the wheels up to 500 times!

Wheel Bonus feature - if you’re awarded this, you’ll get a single spin of the highest paying wheel.

IGT has created a very well-designed game here. The visuals are super sharp and the bouncy, electro soundtrack is a good match. The developer has kept things simple on the gameplay front. The lack of free spins will put some people off. We did well when we did hit the Wheel Bonus feature. It’s not the easiest to trigger though. This is a medium to high variance game with maximum payouts of 1,800 times stake (a screen full of wilds).

We liked Electric Tiger - the high-end sound and visuals and simple gameplay combine well. There’s enough of a sting in its tail to make Electric Tiger worth a play. If you like expanding wilds, can you find them in The Wild Life, by IGT which also features tigers.