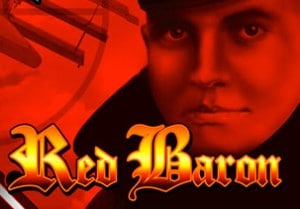 Visually, this historically themed slot is a typical offering from Aristocrat - symbols on the reels include a selection of imagery relating to World War I including Zeppelin airships, radios, planes, Iron Cross medals (the wild) and of course von Richthofen himself. The Red Baron and his three-winged plane are the biggest payers, giving you 1,500 times your line bet if you find a 5 symbol combination.

Appearing only on reels 2, 3 and 4, the target symbol is the scatter - find 3 of them on any single spin and you'll trigger the bonus round. Here you'll be awarded 15 free spins. There are extra bonuses on offer though depending on which mission you choose to take on. The goal is to try and hit as many plane symbols during the feature as possible with the bigger prizes on offer if you catch more planes.

For example, opt for the easiest mission and you'll only have to find 4 plane symbols during the feature to win a 10 times your stake. Mission 2 challenges you to collect 8 planes for a 15x bonus. It's 12 planes and a 25x bonus if you opt for mission 3. Choose Mission 4 and it gets riskier still with 16 planes needed to win a 60x bonus. Opt for the most daring raid of all, Mission 5 and you'll need to find 20 planes for a 140 times your stake bonus.

Regardless of which mission you choose, if you find 25 planes you're in line for a 40x bonus. Keep tabs on how many planes you've caught via the meter on the top right of the reels. The bonus amounts come on top of any normal wins gained during the feature.

During the free games, the Iron Cross medal remains wild - it again only appears on reel 3 and substitutes for all other symbols including the scatter. It can also award a multiplier prize if it forms part of a winning payline. Look out for extra payouts of 2x, 3x and 5x.

Red Baron is a typical Aristocrat slot - what it lacks in sophisticated sound and visuals it makes up for with impressive gameplay. This is another highly volatile slot so expect plenty of leans spells but if you get lucky during the free spins round it's possible to shoot down serious amounts of coins. Theme wise, I can’t find any slots which are based exclusively on planes - you could though, fly on the USS Enterprise with WMS Gaming’s Star Trek Red Alert.