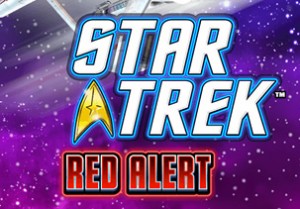 The Star Trek logo is a wild symbol and it replaces all symbols except the Feature symbol. The Feature symbol says “feature” and if you get 3 or more randomly on the reels the Red Alert feature is triggered. You’re also awarded with 1 medal. There are unlimited free spins in the feature but in order to continue you must have a winning combination. The multiplier for winning combinations range from 2x up to 15x the amount won. You’ll begin with 5 Shields (also known as 5 free spins). You will lose one shield each time you don’t have a win on a free spin.

Once all of the shields are gone, you’ll need to choose between two paths and try to win the Spin Till You Win option. You will either reveal “Shields to Full” or “No Extra Spin”. Shields to Full will recharge your shields back to 100% and the feature goes on. If you reveal No Extra Spin the feature will end.

Anytime during your spins you get 3 or more Shield symbols, your shields are reset back to 5. You can also earn extra medals for triggering the feature. Once you’ve blasted away the 15x multiplier, it remains on the screen and you earn more medals each time you hit it.

Anytime you have a winning spin that does not award the Red Alert feature, you’ll step into the Win Warp feature. This features 4 different features within it as described below:

Something different with this slot is that you can progress to the Star Trek Explore New Worlds slot game. Once your medal total reaches 50 you’re on your way. Saying that, you’ll love the Win Warp feature if you’re a Star Trek fan. An added bonus are the added video clips from the series that are shown throughout the game. Star Trek Red Alert is a good game but there are better WMS slots such as Wizard of Oz Ruby Slippers and Raging Rhino.