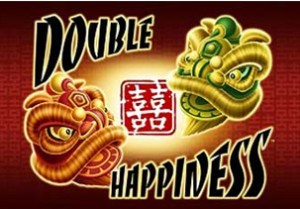 The imagery in Double Happiness has a definite eastern feel. Joining Aristocrat's standard playing cards are symbols including a set of cymbals, a drum, fire crackers and a Chinese lantern. They're bold, bright and stand out nicely against the white reels and the traditional red tinged, temple. The cheery monk is the biggest payer of the standard symbols – 5 in a payline will net you a 1,000 coin payout.

The golden dragon is the wild symbol, substituting for everything apart from the scatter. Five wilds will net you 2,500 coins. The double happiness symbol (red backdrop with white Chinese writing) is the scatter. Three to five scatters anywhere on the reels will see you pocket between 5 and 100 times your total stake. You'll also trigger the Free Games feature.

3, 4 or 5 scatters will get you 10, 15 or 20 free spins respectively - the extra wrinkle here is the addition of 2 roaming wilds for the duration of the feature. The two roaming wilds move 1 position with each spin. Things really heat up if both of the roaming wilds end up in the same place as part of a winning combination. If that happens, your payout will benefit from a bumper 10x multiplier.

That's not all - if the double happiness scatter appears directly underneath a random wild, you may be awarded a scatter win. More free games can be re-triggered during the bonus round which can result in a total of 50 free spins.

Double Happiness is a fairly typical offering from the Aristocrat stable - the visuals are perfectly fine and the catchy soundtrack will be familiar to anyone who has played slots made the Australian developer before. It's not overly stocked in the features department but the roaming wilds are a nice addition to the traditional free spins fare.

The variance is on the high side of medium so some careful bankroll management is recommended. Get lucky in the free spins round and Double Happiness can prove to be a memorable Asian adventure. If you like the theme, Choy Sun Doa is very popular and highly volatile. As for wilds within the free spins feature, you can’t go wrong with WMS’ Raging Rhino.