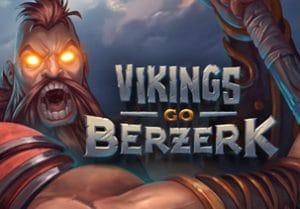 Vikings Go Berzerk is a terrific looking game - the reels are set within a longboat and include 4 lower value coins and a quartet of higher value Vikings. There's also a wild that replaces everything apart from the free spins, treasure chest and golden treasure chest symbols.

As you'd hope given the adventure theme, there's plenty of action on offer in Vikings Go Berzerk:

Any wilds that land during the feature are sticky and will remain locked in position for the duration. Whenever 1 of the Vikings land, it will do battle with a sea creature. If the Viking wins, it will turn into a wild.

There's plenty to get stuck into in Vikings Go Berzerk. The volatility isn't stratospheric though - in fact, the variance is in the medium range, offering a balance of payouts in both the base game and free spins features.

Yggdrasil Gaming are renowned for their terrifically well-designed slots games and Vikings Go Berzerk will add to that glowing reputation. It looks terrific and the range of features is impressive too. Put all that together and Vikings Go Berzerk is an entertaining and highly playable game. I also recommend you take a look at its prequel, Vikings Go Wild.