Recommended casinos to Play The One Armed Bandit 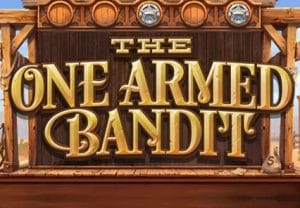 As usual for an Yggdrasil-powered slot game, the design in The One Armed Bandit is very nicely done and conjures up a real wild west feel. There’s plenty of action on offer in this cowboy adventure too.

Respins feature – this is triggered every time a scatter lands. The scatter symbol turn into a wild (the sheriff’s badge) and the reels spin again. Look out here for the multiplier wilds which can boost payouts by 5x on designated reels. You can land more than 1 scatter to trigger multiple respins.

Free Spins feature - the big feature round is triggered by landing 5 scatters on the same spin. You’ll then receive 10 free spins. If you triggered the round from a respin, then any respins you have left are carried over as free spins. The 5x multiplier wilds can hit on all 5 reels during the feature.

These aren’t the only multipliers in play though. The free spins start with a 5x multiplier. Each time a bonus symbol lands, 1 extra free spin is added to your total. Landing 2 bonus symbols also adds 5x to the multiplier. Land 3 of them and multiplier increases by 10x – giving you a multiplier up to 20x if you’re lucky.

We liked this Wild West yarn. The sound and visuals are as impressively done as you’d hope from an Yggdrasil Gaming slot game. The developer hasn’t shirked on the features either which can deliver plenty of excitement. The respins come along regularly enough but it’s the Free Spins feature where the biggest opportunities arise thanks to the multipliers.

As you might expect given the potential on offer from such big multipliers, this is a volatile slot game with potential wins of 9,440 times your stake on every free spin with the 20x multiplier. Get on a roll with those multipliers and The One Armed Bandit could deliver some pretty deadly action. You can also try your luck at Dead or Alive II (by Net Entertainment) which offers wins of 111,111.11 times your stake in 1 of the free spins features.