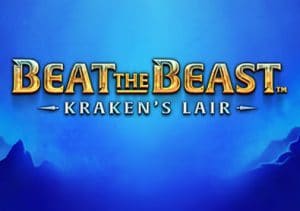 As usual for a Thunderkick release, there’s a high-end look to the visuals in Beat the Beast: Kraken’s Lair. With the shipwreck-strewn ocean floor in the background you’ll see A to 10 royals as well as a trident, pendant, treasure chest and kraken statue. The kraken itself is the most lucrative symbol. Land 2, 3, 4 or 5 on 1 of the game’s 9 paylines for an award equal to 1.5, 10, 50 and 500 times your total stake.

The gold kraken emblem symbol serves a dual role. It’s the wild so can substitute for all the standard symbols. It’s also the scatter so can pay scatter style and trigger the feature round (more on this below). Land 3, 4 or 5 anywhere on the same spin for an award of 2, 20 or 200 times your total stake.

The Expanding Wild feature is triggered if you land a winning combination that includes a wild. One of the standard symbols that makes up the win will expand and fill the whole reel. A payout calculation follows with the expanded symbols in place.

Land 3 or more of the kraken emblem on the same spin to activate the Bonus Game feature. After your payout of 2, 20 or 200 times your stake you’ll go on to play 10 free spins. At least 1 kraken emblem is added to a random position on the reels on each free spin. Retriggers are possible here too meaning unlimited free spins.

Classy design and simple, volatile gameplay are what we’ve come to expect from Thunderkick slots and Beat the Beast: Kraken’s Lair doesn’t disappoint on either score. The visuals are neat and crisp as usual and the gameplay, though not offering a wide variety of extras, offers some high variance play.

The top payout stands at 7,777 x stake per spin/free spin with the RTP at 96.12%. If you’ve enjoyed Thunderkick’s formula, expect more of the same from this release. This is the first in the Beat the Beast series – it’s definitely set down a marker of quality. If you want slots featuring the infamous kraken, Release the Kraken by Pragmatic Play is recommended.