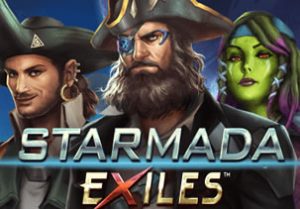 There’s a comic book feel to the design in Starmada Exiles. With planets, asteroids and spacecraft in the background, you’ll see 5 lower value equipment symbols. They’re joined by the 4 member crew of Exiles.

There are robot, male and female pirates as well as the bearded pirate skipper who is the top paying symbol. Land 3, 4 or 5 of these in combination and you’ll receive a payout of 2, 10 or 60 times your stake. There’s also a standard wild that replaces everything bar the scatter. Starmada Exiles comes with a pair of extras.

Plunder Bonus feature - this is triggered by landing the Earth scatter on reels 1 and 3 on the same spin. Click on 1 of the scatters. You’ll either receive an instant cash prize or a wild upgrade where 1 member of the Exiles will become wild during the free spins. When an Exile turns into a wild, the symbol morphs into green emerald. These can then award a cash prize every time they subsequently hit.

Starmada Exiles Free Games feature - land the scatter on reels 1, 3 and 5 to trigger the main feature. On offer here are 10 free spins. Any extra wilds added during the Plunder Bonus feature become active now. Look out too for red ruby symbols which can land on reel 5. Collect 3 of them and you’ll turn another member of the Exile crew wild. Re-triggers are possible too.

Once you’ve played out all of your free spins, all green emerald symbols turn into scatters, making it that much easier to trigger the Plunder Bonus and the Starmada Exiles Free Games features.

There’s a suitably grufty look to the visuals here which is just right given the space pirates theme. The features are slightly unusual in the way that one carries through to the other. The extra wilds have a decent impact during the free spins, especially if you manage to get all 4 members of the crew wild.

Expect to land the feature regularly too. We found this game to be a medium variance offering with maximum wins of 1,500 times your stake on each spin or free spin. This tale of galactic pillaging is an unusual but playable one. If you like the space or pirate themes, then set sail with the Starmada Exiles. Alternatively, Opal Fruits by Big Time Gaming is definitely a slot game I highly recommend.