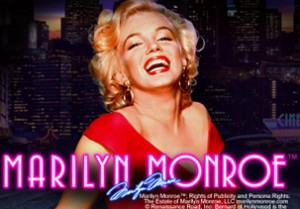 The visuals in Marilyn Monroe have a suitably glitzy feel. The reels include a variety of images of Marilyn in various poses, her star on the Hollywood Walk of Stars, a movie camera and a selection of magazines in which she appeared on the cover. The images are all nice and clear, set against a glamorous New York skyscraper backdrop. The action on the reels is accompanied by a classy, big-band style soundtrack. It looks and sounds excellent.

The laughing Marilyn is the game's Wild and substitutes for every symbol apart from the scatter. All winning paylines that feature the wild are doubled. The wild can be a massive payer. Find a winning combination of four and a 2,500 coin payout is on offer. Hit a five-wild combo and a massive 10,000 coin jackpot awaits. The wild is stacked to fill the whole reel and can appear on any reel.

Look out too for the Marilyn Monroe signature scatter which triggers the Backstage Bonus feature. 3 or more scatters anywhere on the reels triggers this feature. Once active, you'll be awarded an initial 10 free spins with a 2x multiplier which doubles any payouts. You'll then be presented with 5 pictures of Marilyn herself. Select 2 of them to reveal extra free spins or multipliers.

If 3 or more scatters hit during the Backstage Bonus feature you'll be awarded 35 extra spins, all subject to the previous multiplier. There's no limit to the amount of times this can hit. A potential 45 free spins with a 10x multiplier will soon have the cashier total racing.

Marilyn Monroe is high variance so you'll need to keep a careful watch on your bankroll. Expect plenty of pretty lean spells with little happening in the win column. When you hit the feature though, the results can be spectacular. Combine the stacked wilds, big multipliers and a host of free spins and Marilyn Monroe could be delivering an Oscar winning performance. It’s often overlooked unfortunately and one of the most underrated slots Playtech has developed. If you like high volatility though, Great Blue and Sultan’s Gold are recommended.