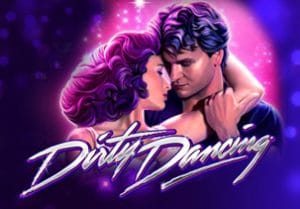 The visuals in Dirty Dancing have a reel feel of the early 1960s - joining the lower value playing cards are a radio, a jukebox disc, dancing shoes and a classic open top car. The most lucrative standard symbols are the comic book versions of Penny and Baby who'll get you 300 or 500 coins if you land 5 on a payline.

Patrick Swayze's character Johnny is the wild, replacing everything bar the Dirty Dancing logo which is the scatter - 5 wilds in a line will net you a cool 5,000 coins. 3, 4 or 5 scatters anywhere on the reels awards a payout totalling 5, 25 or 125 times your line stake but triggers no feature.

Dirty Dancing comes with a trio of features, all of which are triggered at random in the base game. First up is the Whirling Wilds feature - an animated pairing of Baby and Johnny dance across the reels and leave a trail of between 2 and 6 wilds. A new payout is made with the wilds in place.

Then you have the Mambo Free Games feature - once triggered, you get to spin a wheel which will determine how many free spins you receive (3, 4 and 5). Also on offer are a 2x multiplier and dancing wilds. Each segment turns into ‘Collect’ once you land on it – you keep on spinning until you land collect. 2 more free spins are added to the total then you start your accumulated haul of spins plus extras.

Dirty Dancing Bonus feature - this is a multi-level pick me round. Choose 4 out of the 9 boxes shown. If you manage to find 3 of that level's winning object (records, radios, shoes, cars, hearts or diamonds), you'll win cash prizes as well as moving to the next level. Prizes of up to 4 times your total stake are on offer on level one, rising to 20x on level 5. Make it to level 6 to win 1 of 2 progressive jackpots.

If you make it through the levels of the Dirty Dancing Bonus feature, you will play the Time of My Life Jackpot Game – you’ll get 1 final set of choices. Keep picking until you find 3 Johnny or Baby symbols and you'll win the corresponding progressive jackpot.

As you'd expect from an adaptation of hit movie, the design here is impressive. The visuals are well done and the soundtrack harks back to the era of the film. There's a tidy range of features on offer too. They come along at fairly regular intervals so you won't be left waiting for ages for something other than the standard base game action.

Fans of the movie will find plenty to like in the slot adaptation. Even if the delights of a bopping Patrick Swayze passed you the first time around, the features on offer make Dirty Dancing a slot worth considering. Saying that, Playtech has produced better branded slot games in my opinion with The Flintstones and Top Gun recommended.