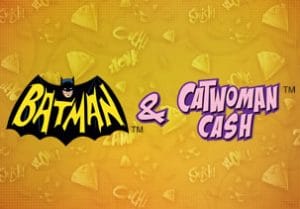 Don't expect to see the brooding, enigmatic Batman as seen in the Christian Bale films - this slot game is based on the camp 1960s classic starring Adam West and Burt Ward. The visuals have a retro feel and include a bat boomerang, Batman's utility belt, a pair of gold cats, a whip and mask, a speedboat and a helicopter. They're joined by photo versions of Robin, Catwoman and Batman who can all land stacked. The Caped Crusader is the top payer of the standard symbols, awarding 400 coins if you land 5 on a payline.

The other symbol to look out for is the Bonus symbol - when this lands on reels 1 and 3, you'll trigger the Cat Burglar Bonus feature. Pick 1 of the Bonus symbols to reveal either a cash prize or a +1 which will be added to the multiplier total when you go on to trigger the free spins round.

To trigger the Batman vs Catwoman Free Games feature, you'll need to land the bonus symbol on reels 1, 3 and 5. Beginning with a 2x multiplier, pick from the 4 Batman boxes to reveal the number of free spins (between 7 and 25). Then choose from the 4 Catwoman boxes to reveal which symbol will be stacked for the duration of the feature. Remember that the multiplier can go up to 5x as you can get a +1 from the Cat Burglar Bonus feature.

After the free spins are complete, the multiplier is reset to 1x. Catwoman then adds extra bonus scatters to the reels, greatly enhancing your chances of re-triggering the free spins or hitting the Cat Burglar Bonus feature within the next 24 spins (which can increase the multiplier).

Batman & Catwoman Cash also offers a shot at a massive payout courtesy of the DC Super Heroes Jackpot. This can be randomly triggered on any spin. You'll then go to a new screen and given a selection of 20 icons - click on 1 of them to reveal a colour that corresponds with the 4 different jackpots: 2 greens trigger the Mini, 3 blues the Minor, 4 yellows the Major and 5 reds the Grand which is where the really big money is on offer.

As we hoped, Batman & Catwoman Cash is something of a camp classic - the visuals have a real 60s feel and the action plays out to a deliciously cheesy backing track. Look out for clips from the TV series interspersed with the spins.

On the variance scale, we'd put this slot on the high side of medium. The free spins aren't the easiest to trigger but it can be worth the wait if you've managed to accumulate the maximum 5x multiplier and get a high value symbol as the stacker. We managed to win over 450 times our stake from 10 free spins.

We enjoyed Batman & Catwoman Cash. Waiting for the free spins can be a little frustrating but if you can get stuck in, there are some decent opportunities in this potential cult classic. I also recommend you play the 2 other slots in this DC Comics series, Superman The Movie and Batman & The Joker Jewels.