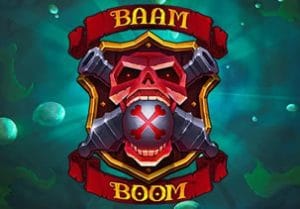 The colourful design here is simple but nicely done. The reels appear as if you’re looking out of a porthole on an old wooden sailing ship. You’ll fine olde worlde royal symbols as well as jugs of ale, wooden barrels and a pistol. The best of the standard symbols is the pair of cannons which pay 3.3, 6.6 or 16.6 times your total stake if you land 3, 4 or 5 on a payline.

Those same amounts are on offer from the X cannonball which is the wild. There’s also a scatter that offers awards of 5, 50 or 100 times your total stake. Baam Boom comes with a pair of bonus rounds.

Treasure Chest feature - land 3, 4 or 5 scatters on the same spin and you’ll receive 10, 20 or 30 free spins. Any cannonball wilds that hit here are collected. You’ll then get to fire them at a treasure map. If they uncover a gemstone, you’ll win a cash prize. Each map contains 8 prizes. Once you’ve uncovered 5 prizes, you’ll move onto a new map. There are 5 maps in each level and 5 levels to work through.

Bonus feature - every time a wild hits in the base game, it’s collected in a meter above the reels. Once you’ve amassed 5 of them and filled the meter, you’ll trigger the feature. You’ll then be awarded 1 of the maps from the Treasure Chest feature. Pick your 5 targets from the grid then fire the cannon. On maps 1 and 2 you’ll be given hints as to where the treasure is hidden. A successful hit awards a prize. After you’ve had your 5 shots, you’ll return to the base game.

We enjoyed Baam Boom. The visuals are well put together and the garage rock soundtrack might not seem an obvious fit for the theme but works very well. The features aren’t bad either. The free spins speak for themselves. The Battleships-style picks round is a novel addition though and certainly spices up the action. Awards can top 166 times your stake per hit if you work your way through to the final map.

If you fancy a pirate adventure with a twist, then you’ll want to set sail with Baam Boom. If you want something more volatile, Pirate’s Charm from Quickspin is worth playing.