Recommended casinos to Play Age Of The Gods 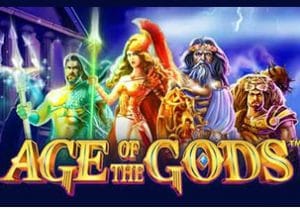 Age of the Gods is a well-designed slot - joining the lower value playing cards are a warrior's helmet alongside the god and goddess symbols. They're well drawn and crackle into life with some quality animations. The backing track is right in keeping with the epic theme too.

The chief attraction on Age of the Gods is the Free Games feature which is triggered by landing 3 or more of the scatter symbol anywhere on the reels. You'll be taken to a new screen and presented with a selection of coins behind each of which lies a Greek god. Pick 3 of the same Greek god and you'll be awarded that feature. Land the Hades symbol though and you'll return to the base game without playing any feature. There are 4 free spins features in all:

After you've completed your initial free spins, you'll be taken to the coin picking game and given an opportunity to land some more. Once again find 3 of the same god to win the appropriate feature. It's possible to land the free spins on multiple occasions if you make the correct picks. As before, the Hades symbol will send you back to the base game.

Age of the Gods also comes with a progressive jackpot element - triggered at random, you'll be taken to a new screen and get to pick from 20 coins, behind each of which is a jackpot symbol. Find 3 the same and that's the jackpot you'll win. There are 4 in all offering different levels of payout. Once the progressive round is triggered, you're guaranteed to win at least 1 of the jackpots with the biggest being the Ultimate Power jackpot.

There are plenty of winning opportunities on offer in the base game too - land all 5 god symbols on an active payline in any order and you'll trigger the Pantheon of Power On Reels feature which is worth 10 times your stake. The wild is the top payer overall - land 5 in a row for a massive 10,000-coin haul.

This game is all about the bonus features - the ability to re-trigger any of them via the picking game is a big bonus. We managed to re-trigger extra spins on multiple occasions and enjoyed the results that followed. You may have to wait for an initial trigger but your patience can be rewarded in the end.

We enjoyed Age of the Gods - the sound and visuals are top notch and it offers a quality range of bonuses. If the ancient gods are in a benevolent mood, there are chances to secure an Olympian haul of treasure too. The bigger wins will come in the Poseidon Free Games feature as up to 5 wilds on each free spin can result in 7,000 times your stake wins! I also recommend you take a look at the other games in the Age of the Gods series including Age of the Gods Hercules and Age of the Gods Furious 4.