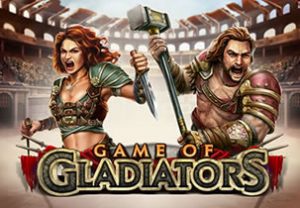 The gladiatorial arena is the setting here. On the reels you’ll see A to J royals plus a quartet of higher paying gladiator symbols. The best of these goes by the name of Scissor and sports a gold helmet. Land 3, 4 or 5 of these for a payout of 2, 4 or 20 times your stake.

More rewarding still is the tiger which is the wild. As well as replacing all the standard symbols, it pays up to 25 times your stake per payline. On any spin you could randomly receive of the following 5 Primus extras.

Game of Gladiators also comes with a triggered Enter The Arena Battle feature – this is activated by landing 3 of the portcullis scatter on the same spin. First choose either Amazonia or Spartacus which will be scatters for the duration of the free spins.

A battle then commences between your chosen warrior and the gladiators. If all the warriors are defeated, you’ll win. If the gladiators fill the meter, you lose. The free spins keep on coming as long as the battle is going on. You can bring 2x and 3x multipliers into play here too to the new paytable that is in use.

If you chose Amazonia and she emerges victorious, you’ll get a bonus prizes of between 20 and 100 times your stake on top of all the standard wins. Spartacus awards a free spins retrigger.

At first glance, Game of Gladiators looks like fairly standard Roman era fare. The range of extras are pretty unusual though. Especially the battle element of the free spins which takes a bit of getting used to. As usual for a Play ’N Go slot game, this is a very volatile with wins of up to 5,000 times your stake The design isn’t quite from the highest echelons but it’s good enough to the job.

Put all that together and Game of Gladiators is a slot game to consider, especially if you like the ancient theme or volatile play. I also suggest Champions of Rome by Yggdrasil Gaming or Tiger’s Glory by Quickspin which take you into the Colosseum.