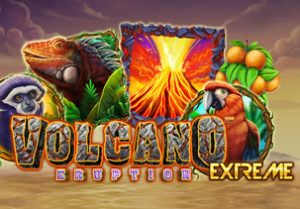 The colourful design in Volcano Eruption Extreme is nicely done. It has a prehistoric, ‘Land That Time Forgot’ feel. With vegetation, a cloud-filled sky and a volcano billowing smoke in the background, you’ll see rock-style lower value royal symbols spinning around the reels.

They’re joined by oranges, monkeys and parrots. The best of the standard symbols is the dinosaur. Land 5 of these in combination and you’ll receive a payout of 20 times your stake. The volcano spewing lava is the wild. It can land on the middle 3 reels only and substitutes for all other symbols. Land 2 of them on the same spin and you’ll pocket a 2 times stake award.

Things get far more interesting if you land 3 of them on the same spin though. As well as a payout of 5 times your stake, you’ll also trigger the Eruption feature. On offer here are 5 free respins. A stacked wild will fill the whole of the middle reel for all of those free spins. The volcano can also erupt ad deliver even more wilds onto reels 2 and 4 which can deliver some potentially explosive combinations.

The base game action ticks over steadily enough. It’s the Eruption feature where the game has the potential to sparkle. We found it quite tricky to trigger. If the volcano fires out the extra wilds in the right direction, it can be lucrative though – to the tune of 3,289 times your total stake

Despite the volcano theme, the variance isn’t especially high. It’s a medium volatility slot game. Sure, you’ll get some dormant spells but decent amounts of activity too. The visuals here are excellent and there’s an exciting feel to the orchestral soundtrack. No complaints then about the design.

Volcano Eruption Extreme might be a little too simple for some tastes. The variety of extras isn’t wide. The stacked wild in the Eruption feature can deliver some serious action though. If you liked the original Volcano Eruption, this Extreme version should appeal. I would also urge you try Volcano Riches from Quickspin.