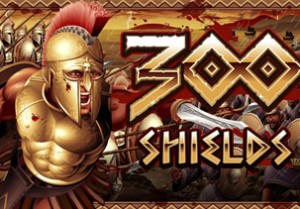 Originally released in 2011, 300 Shields is something of a veteran as far as online slots go - it's stood up pretty well though. Set against a rural hillside backdrop of temples and villas, the reels include a selection of arrows, swords, ships and warriors. They're complemented by playing card values from A to 9.

There's also a standard wild (the warrior) which will net you a tidy jackpot of 1,000 coins if you manage to land 5 in a payline. The shield is the scatter. Two or more will earn you a payout of at least double your total stake. Three scatters or more and you'll trigger the Battle feature which awards an initial 5 free spins with any wins featuring the warrior wild doubled.

Every time you land a shield during the feature, it will be collected with extras on offer the more that you rack up:

You can re-trigger more free spins if three or more scatters land on a single spin.

A 300x multiplier is certainly a very tempting proposition - don't expect to find it very often though. Just as the odds of 300 warriors holding off a rampaging army were long, so are the chances of hitting the big multiplier.

This is a highly volatile slot so patience and a decent bankroll are required - but if you have both, there are some spectacular rewards on offer. Yes, you may blitz through your bankroll with little to show for it. You can hit some massive payouts though.

If you're a fan of high risk, high reward slots then 300 Shields most definitely fits the bill. Despite its age, this slot still looks and sound decent enough. Throw in the explosive bonus feature and 300 Shields remains an enjoyable and very playable slot. If you like high multipliers, Aristocrat’s Lucky 88 has multipliers up to 88x in the feature but if it’s volatility you’re after, you can’t go wrong with WMS Gaming’s Black Knight II.