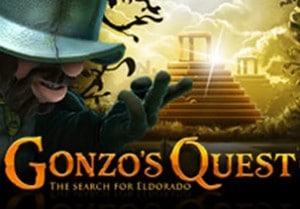 It comes packed with features, has quality graphics and offers some impressive payouts. You can play from 20p up to £50 per spin. Let's take a closer look. The 5 reel, 20 payline Gonzo's Quest slot challenges players to join explorer Gonzalo Pizarro aka Gonzo and a group of Spanish conquistadors on a hunt for Amazonian treasure and a lost city of gold (Eldorado).

Rather than traditional spinning reels, Gonzo's Quest uses Avalanche Reels which see the Mayan symbols explode and disappear when they make a winning combo. The win multiplier increases with every new avalanche in the main game meaning your wins are boosted. It starts off with a 1x multiplier for a single avalanche, 2x for two avalanches, 3x for three avalanches and 5x for four or more avalanches. These numbers are just for the main game. They get even bigger in the Free Falls feature as described further down.

Of chief interest to slot lovers is the Free Fall feature which offers 10 free spins and an up to a 15x multiplier. Keep an eye out for a trio of Free Fall scatter symbols on three consecutive reels, starting from the leftmost column, which triggers this feature (i.e. on reels 1, 2 and 3 simultaneously).

The multiplier will go up from 3x to 6x to 9x right up to 15x with every new avalanche win. Combine that with the 10 free falls (spins) and it's easy to see how payouts can build up to hefty proportions. It's possible to trigger 10 more free falls during this bonus round by finding three Free Fall symbols.

With beautifully designed graphics and some sleek animations (look out for a moonwalking conquistador when you're celebrating a win), Gonzo's Quest is a joy to play. The animations have stood the test of time and are complemented by a tropical sounding South American soundtrack.

The game is a medium to high variance slot in my opinion despite splitting opinions amongst slot players. The maximum win in the base game is a cool 625 times your stake whilst it’s a whopping 1,875 times your stake in the Free Falls feature. I have had pretty good wins with the Avalanche Reels feature though but don’t expect them to come often though. By the way, Gonzo’s Quest is also available to play on mobile and tablet devices and is a must if you love NetEnt slots. Saying that, I highly recommend Dead or Alive which has also become a cult favourite.